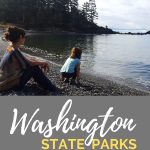 by Todd Holcomb – The state of Washington is well-known as a hub for national parks and forests on the West Coast. Adventurers from around the world flock to the Cascade range or towering Olympic mountains, all under the watchful eye of Mount Rainier ever looming on the horizon. While these federally-managed wonderlands are worthy experiences of their own right, some of the best Washington landscapes and getaways are found, and preserved by the Washington State Parks system.

The Washington State Parks website lists 142 state parks in all, ranging from farmlands and deserts of eastern Washington to the mountains, forests, and coastal lands of the western edge. A $35 Annual Discover Pass gives visitors vehicle day-use access for one year, or through a one-day pass for $11.50. Various discounts are available with additional access for disabled individuals, senior citizens, disabled veterans, or foster parents camping with children in their care.

Overnight visitors in campgrounds or cabin facilities can bypass the Discover Pass thanks to camping fees. While drop-in campers are always welcome, you may also make a camping reservation for $8 online or for $10 by calling (888) 226-7688.

Be sure to check the Washington State Parks Discover Pass webpage for more information on boating fees, winter recreation fees, and other fees. You won’t need a Discover Pass if you’re staying the night because your vehicle access pass is covered with your camping fees, but keep in mind, accommodations are first come, first serve.

With so much to see and do, the hardest part can be deciding where to begin. These six Washington State Parks are great destinations for the whole family.

Within walking distance of the US – Canadian border, Crawford State Park Heritage Site is a two-and-half hour drive north of Spokane, Washington and well worth the effort to get there. Your whole family will love exploring the 2,000 foot Gardner Cave nearly 300 feet below the surface on a free guided tour offered through the summer months.

Homesteader Edward E. Gardner, or his horse rather, is said to have discovered the Gardner Cave by stumbling upon its sinkhole in 1899. Mr. Gardner was known to be a character as colorful as the cave itself, and legend has it that he lost the cave and surrounding lands to a Mr. William H. Crawford in a poker game. After logging the land, Mr. Crawford donated 40 acres, which included the cave to Washington State Parks.

Crawford State Park is a day use area, but camping is available at the Boundary Dam Campground a mile away, or look for lodging in nearby Metaline Falls, Washington.

Riverside State Park is 11,000 acres of forest land located along the Spokane River near town. With its proximity to all the Spokane City amenities, it might be easier to ask what you can’t do in this year-round Washington State park rather than what you can.

Along with camping, hiking, and mountain biking, there are 25 miles of trails designated for horses, as well as an obstacle course and 60-foot arena. An additional 600 acres has been set aside for off-road vehicles, and 200,000 feet of the Spokane River shoreline is available for fishing, swimming, boating or stand-up paddleboard fun.

Long before it became a popular vacation destination, this area was a popular fur trading and a gathering spot for Native American tribes. You can explore some of that history with your kids on the Indian Painted Rocks Trail, a protected Native American pictograph area, as well as in The Spokane House Interpretive Center at Nine Mile Falls.

Pass the days on the beach, playing on the playground with your kids, or riding a horse on a guided trail ride. Bring your snowshoes or cross-country skis to enjoy the winter season. When you imagine escaping to the mountains, you’re imagining Lake Wenatchee State Park.

In 1911, when Robert Moran, former Seattle mayor and ship builder, initially tried to donate 2,700 acres of land he had accumulated on Orcas Island in Washington’s scenic San Juan Island archipelago. Unfortunately, there wasn’t an agency in place that could accept his generous donation.

It wasn’t until 1921 that a newly-formed Washington State Parks Committee was able to accept his donation, but they still didn’t have funds to renovate or maintain it, so Robert Moran spent his own money to begin building the park infrastructure. Eventually, the Civilian Conservation Corps (CCC) took over the building projects, including an observation tower on the summit of Mount Constitution, a 2,398-foot summit on the island.

Today, families can stand atop this tower and look out across the San Juan Islands toward Mt. Baker and the Cascade Range in the distance. Moran State Park now covers 5,424 acres and includes 151 campsites, 5 freshwater lakes, and plenty of hiking and biking trails, making it the perfect location from which to explore the San Juan Islands with your family.

Driving a personal vehicle to the island can be an exercise in patience (ferries are crowded during the busy summer months), but if you get ahead of the game, you can make a ferry reservation at www.takeaferry.com. Or you can park your car and take advantage of the many rental and transit options on the islands. The San Juan Islands official travel site is a great resource for finding exactly what you need.

If the islands are calling to you, but driving to a destination is more appealing, then consider spending your next family vacation at Deception Pass State Park. This Washington State park spans Whidbey and Fidalgo Islands at the north end of the Puget Sound with the 180 foot Deception Pass Bridge connecting the two. Explore the cliffs around Lighthouse Point, go for a pleasant walk on Rosario Beach and let your kids play in the tide pools, or take your boat for a ride out to Hope Island State Park in Skagit Bay.

Grab a park brochure for helpful information about the park history, amenities, activities, and even a topographical map of the area. There’s a reason Washington State Parks lists Deception Pass as their most visited state park. With 77,000 feet of rugged saltwater shoreline, three freshwater lakes, and easy access to nearby towns, Deception Pass State Park will keep your family busy exploring for days.

Cape Disappointment State Park (formerly Fort Canby State Park) stands as sentinel over this fierce waterscape and an equally turbulent history. Named for Captain John Meares’ failed attempt to navigate the Columbia River Bar, Cape Disappointment has witnessed the onset of early explorers, the success of the Lewis and Clark Expedition in 1805, the building of Fort Canby in 1875, the construction of the Cape Disappointment Lighthouse (the oldest operating lighthouse in the Pacific Northwest), and the eventual development of the State Park your family can enjoy today by the Civilian Conservation Corps.

Most of the campsites look out to sea just below the North Head Lighthouse, but there are other sites available near O’Neil Lake as well. Come learn about the colorful history of this place at the Lewis and Clark Interpretive Center, enjoy the sands of the Long Beach Peninsula, explore the ruins of military bunkers being reclaimed by nature, and wander through old growth forests to lighthouses on cliff edges.

Washington State Parks are more than just beautiful places for an escape. They are pages of our own story, etched into our lands and preserved in our parks. But they don’t just look to the past, either. With programs such as No Child Left Inside and Junior Ranger, the Washington State Parks and Recreation Commission is inviting a whole new generation to fall in love with the natural wonders of Washington State.

As well, volunteers can trade 24 hours of Washington State Parks volunteer service for a complimentary Discover Pass. So, whether you are looking to get away from it all, or you are hoping to inspire your kids with local history and natural wonders, you can’t go wrong with a family vacation to any one of these Washington State Parks. And these are just the beginning, so grab a map and a Discover Pass and start planning your trip today.

Todd is an outdoor travel writer, a trekker of wild places and distant lands, and a pilgrim on this human journey. Learn more at www.clearwatertrekker.com.