Buy a Signed, Limited Edition Print of this Photograph HERE!

by Jennifer Fontaine – The soft buzz of the vibrating alarm on the wood table next to the bed sounded and as I rolled over to look out the window at a pitch dark sky, my stomach fluttered with the excitement of the once-in-a-lifetime road trip we were about to embark on. It was officially our daughter’s first week of first grade and a part of us lamented we might not get any parenting award for leaving town, but we had already decided that giving her the in-person experience of a total solar eclipse was well worth the unexcused absence.

The plan was ambitious; drive more than 2,000 miles, LA to Oregon and back, in five days. We do road trips. It’s kind of our thing. But, when you add up two eight-hour driving days, 2 five-hour driving days, setting up and breaking down camp four times, one six year old, and a two-minute total solar eclipse, even we were questioning our sanity.

Most of our worries were soothed the moment our road trip warrior, a shiny new GMC Sierra HD All Terrain X, was delivered to our doorstep. The beast, immediately named woo-woo-wooooolfie by our daughter, was 5 tons of polished chrome and steel, loaded with every bell and whistle a road-tripping family could ask for.

As we packed woo-woo-wooooolfie, with camping bin after camping bin after camping bin, on tip toe so as to not wake our slumbering neighbors, we couldn’t help but notice that its cargo room was at least double the size of our family’s adventure truck. It was nice not having to worry about strategically piling camping gear and bins on either side of the car seat, or making sure to leave a view “hole” through to the rear window.

And so, an hour behind schedule (isn’t it always), we hit the road. First stop, was Lassen Volcanic National Park, 567 miles north of Los Angeles, and a little more than halfway to our destination. It was our first time at this northern California national park, but with such limited time, we had to settle for a drive along its scenic byway. We instantly fell in love with the jagged eruptive peaks and stunning alpine lakes, so a trip back to properly explore is already in the works.

Forested with Jeffrey and Ponderosa pines, Manzanita Lake Campground (elevation 5,900 ft.) is the largest campground in Lassen Volcanic National Park. Clocking in at 5,900 feet this campground offer impressive view of Lassen Peak and has many comforts close by, including pay showers and a general store that sells hot coffee and delicious panini sandwiches.

This lesser-known national park is known for its volcanic history, containing 300 active volcanic domes, and as many hydrothermal features, such as mud pots and steam vents. Lassen National Park also offers visitors a diverse ecosystem to explore, boasting over 700 species of flowering plants and 250 species of birds, mammals, reptiles and fish.

The next morning, we once again found ourselves up before the sun, packing up woo-woo-wooooolfie for the final 350-mile push to a campground just south of the path of totality. Truth be told, we almost didn’t have a campground. When we began planning this trip, back in March, we thought highly of our smart and original idea of camping out to see the solar eclipse, and approximately 60 seconds later reality punched us in the face.

There were zero campsites left to reserve and locals had already started charging upwards of $300 per night for a six by six plot of grass with no running water or flush toilets. At this point, dispersed camping became our plan A, while we continued to scour private eclipse Facebook groups and ask camping friends for advice, holding on to the hope that there were indeed Oregonians out there who were NOT price gouging.

Just days before we hit the road, a great friend of ours introduced us to Bob at ElfenWood Campground, a truly family friendly community encampment, run by a neighborhood cooperative. And after another 7 hours on the road, we rolled into what would be our new home for the next two nights. We were gratefully greeted by free range chickens, a barn full of family entertainment, lots of warm, smiling faces, and spacious, secluded campsite that did not cost us an arm and a leg.

That evening as we all gathered around the communal bonfire for s’mores and singing, we were treated to a full briefing by the locals which explained, in detail, where the best solar eclipse viewing spots were and the roads to stay off of if we wanted to avoid heavy traffic. They even had print outs and maps, and did I mention s’mores?

The morning of the total solar eclipse, my husband – the saint – made coffee in the dark and we were driving towards the path of totality as the sun rose. We listened to the early morning sounds of the meadowland birds from the comfort of woo-woo-wooooolfie’s front reclining seats, where whispered conversations orbited around planets and princesses.

For all the concern swirling around crowds and traffic, we didn’t experience any craziness, and the handful of people who squatted near us brought added excitement and camaraderie that would’ve been lost had we found a more “hidden” spot. As the moon began its journey in front of the sun, we were all connected to the constant subtle changes of our surroundings.

Shadows shifted, the contrast of the landscape intensified, and we reveled in every second of its transformation. Strangers became friends, tears flowed freely, shrieks of awe and fascination came from kids and adults, alike, and I was changed. Most of all, I was grateful for sharing the experience with my family, and I was proud that we decided road-schooling was the perfect way to spend the first week of first grade.

Take a peek of my pretty horrible cell phone footage of the moment when totality began (yes, that’s me screaming with excitement). 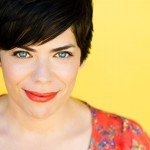 Jennifer Fontaine is the founder of Outdoor Families Magazine, publisher of MommyHiker.com, a blog to encourage outdoor activities with children, and an activist filmmaker inspiring dynamic change in the world. She lives in Southern California with her family.