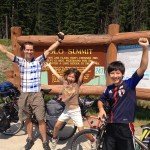 by Charles R. Scott with Erin Kirkland By 2013, National Geographic-featured adventurer and speaker Charles R. Scott and his two kids had already spent the three previous summers cycling more than 7,000 miles together in Japan, Iceland and Western Europe. So it was no big stretch that summer to embark on a fourth adventure in their own country: riding 1,700 miles of the … END_OF_DOCUMENT_TOKEN_TO_BE_REPLACED