Spring has come to New England, but in name only, because winter is behaving like the boyfriend that just won?t accept a breakup. In the beginning, things were thrilling: Cozy nights by the fire, hikes, sled rides full of giggling. But winter and I have grown apart. I want to garden, nature wants to snow. I want to live a life with minimal waste, and this season of cold keeps demolishing my perfectly good things. Still, I wouldn?t change the past few months winter and I have spent together, because daily I am reminded that although the road to our new life will be long, it is certainly the most worthy route.

Several months ago, I came home to a torrential downpour in the living room, necessitating demolition of ceiling, walls, and floor. We managed to get our house back into decent living condition, but a few months later, it happened again, as the ceiling swelled and water poured in. And again, prompting my daughter to ask for her bathing suit. At this point, we started to keep an eye out for animals lining up two by two.

Here we were, trying to build a sustainable life, and the hum of industrial fans drying our floorboards were starting to sound a lot like failure.

To be fair, on the scale of actual life problems these floods rank somewhere above hangnail and below major surgery. On a metaphysical scale, however, closely monitored by two lawyers trying to prove to themselves they haven?t just irreparably damaged their kids with half-baked hippy ideals, it felt atomic.

Mercifully, we were offered a break from chaos with a week in the mountains at the kind invitation of friends. All the kids wanted to try skiing, which couldn?t have pleased this group of outdoorsy parents more. I can?t be sure exactly how long it took to suit up six kids ages four and under, but going by feel, I think it would be fair to estimate 19,743 hours. When the last mitten was fastened, we hauled everyone to the slopes.

The moment one of the kids caught sight of the hill she recoiled as if someone had touched her with acid. Outdoorsy parents like to believe that we share none of the ?dance mom? parental expectations for our kids, but let?s be real, the outdoors is near religion, and if a kid doesn?t revere it as such, it stings like a heresy. These preternaturally patient parents spent the bulk of their morning convincing said recoiling child of the fun offered through falling down a mountain. Negotiations resolved with the child promising to ?make a try,? provided her parents each hold a hand. Try she did, screaming the entire way, face contorted and eyes clamped shut, looking and sounding as if someone was trying to remove her toenails.

But later that night, this same child proudly reported that she had, in fact, been skiing.

Before having children, I loved to spew the mantra of ?there is no try, there is only do.? After kids, I see that much of the beauty is in the try. Seeing a little girl?s big try was the whisper I needed to keep going.

We may have spent our entire reserve budget on fixing three floods. Our garden project is currently stalled by three feet of snow, and we may not have walls at the moment. But sometimes, walls have to come down before they can even be built up.

When I was a kid, my grandfather was fond of boring us, I mean, ?reciting? to us the famed Greek poem Ithaca, which begins:

When you depart for Ithaca,
pray for the road to be long,
full of adventure, full of knowledge.
Don’t fear the Laistrygonians, the Cyclops, and
the angry Poseidon. 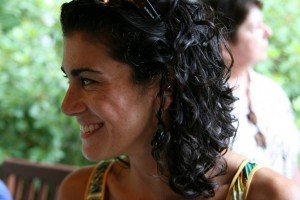 Elizabeth Small is a lawyer by training, writer by nature, and wife and mother by spirit. She has lived up and down the east coast of the United States, in Miami, Washington, DC, and Boston, and now resides in Connecticut.?