Mt. Bachelor near Bend, Ore., soars more than 9,000 feet above sea level, a stunning display, white with snow over lush forests of evergreens. Skiers from all over the world flock to its slopes, but today my family and I are here for a different sort of adventure–the canine variety.

The idea of dog sledding is enticingly, thrillingly exotic to our suburban mentality. And when I heard that Mt. Bachelor’s Oregon Trail of Dreams company offers rides, operated by mushers Jerry and Rachael Scdoris (Rachael is the first legally blind person to complete the Iditarod), I couldn’t slap my credit card down fast enough.

After all, snow and “real” cold, which stays in the mountains of the Seattle and Portland area, is a novelty for us. In other words, we don’t own snow gear. So with nothing else suitable, my husband had been obliged to borrow and don a pair of my yoga pants beneath his jeans, diplomatically mentioning they fit him only with thanks to their stretchiness.

Arriving at a kennel located near the mountain’s ski slopes, we are greeted with an impressive amount of sound as about 40 sled dogs strain at their tethers, howling and barking, tails wagging, the noise swelling to a cacophony that necessitates the hands-over-ears trick as a sled pulls away.

I had been expecting big, furry white Siberian huskies, maybe even a wolf or two. However, these dogs, chained in long lines along the snow, are surprisingly short-haired, medium-sized, multicolored, and relatively nondescript. We learn that’s because these are Alaskan, not Siberian, huskies, friendly dogs who ask unabashedly for attention and petting. We all gladly oblige, especially my kids.

With swift practiced movements, the upbeat mushers select a team. After attaching the dogs’ harnesses, the dogs wiggling and jumping, and a quick safety talk for me, (“Here are the brakes and here’s how you use them,”) they settle my 9-year-old son and me into a comfortable red sled to snuggle under a blanket. Travis, our guide, stands behind us, and with a command to the eager dogs, we’re off into a Jack London novel.

The suddenness of our launch is like being shot out of a cannon. With breathtaking speed, we soar over the snow, dogs surging and pulling, obviously loving every minute. Behind us, the dogs not chosen wail and yelp their grief at being left behind, the sound soon fading. Now all we can hear is the breathing of dogs, the rhythm of paws and the sled runners hissing over a groomed path between the trees. The gear jingles, their breath steams.

Our team’s paws dislodge white projectiles of snow that come pelting back into the sled. “Watch for the brown ones!” Travis hollers with a grin in his voice, and it is true that the dogs didn’t pause in their running glory; bodily functions happen on the fly. My son finds this hilarious.

Travis tells us the names of each dog with obvious affection in his voice, describing the positions they run and how they’re trained. The main job of the musher, we learn, is to build bonds with his or her team, spending time together on and off the trail.

Halfway through the trip, time floating by as if in a dream, Travis gives the dogs an enforced rest. They don’t want it. He gives us each a handful of Bear Hair lichen to eat, and he’s so nice that I discount my thought this is some sort of hazing ritual. It’s exactly the taste and texture one would expect of lichen, but we gamely work it down.

We begin to head back, my son standing on the runners and shouting out “Haw! and “Gee!” (That’s left and right for you non-mushers). He is aglow with excitement, eyes shining and cheeks red from the cold. It’s one of the proudest moment of his nine years.

Between the fresh air and the smooth motion of the sled, I am utterly relaxed. The ride, nearly an hour, is over too soon. My daughter, 13, who went in another sled, dashes up to declare she now intends to become a dog musher. “This is so totally for me!”

Both kids assist with feeding and praising their new friends. This has been a glorious experience.

The misting snow and bright sun create a rainbow over all of us as if to drive that point home. 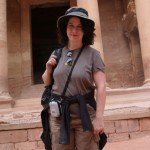 Natalie VanCleave lives in Corvallis, Ore., with her husband and two children.