by Deirdre Davys – There’s something special about arriving by boat. You see the island far away in the distance. It looks tiny, then as you get nearer you begin to make out the cliffs and the tiny white dots of houses clinging to the hill tops. Picking up and dropping off passengers at other islands on the way out from Athens has already made you feel special. You are the ones going the furthest. You start to take a certain ownership of the boat, as other travelers come and go, but you remain. It’s your boat now, at least until you reach the little port of Adamas on the island of Milos.

The engines begin to cut back as the boat approaches the quayside. You can see cars and scooters arriving to pick up friends and family coming home from abroad, or back from visiting relatives on other islands maybe. Perhaps someone was attending a doctor in Athens or coming to see a brand new nephew or niece. It’s fun to speculate as the gangplank is thrown down and the boat opens its jaws to disgorge its passengers and cargo.

There are shouts of recognition, hugs and kisses, tourists looking slightly anxious as they wonder if there will be taxis or buses or if the hotel owner will really pick them up, as he said he would. They needn’t worry, nothing is ever a problem in Greece.

Rod runs the sea kayaking tours on Milos and does a mighty fine job of it. He is a Geologist by profession which makes him the perfect guide for this Greek family sea kayaking holiday, as Milos is a volcanic island bursting with interesting rock formations and Rod is only too happy to tell you all about them.

Milos stands out from many other Greek islands in that it doesn’t earn most of its revenue from tourism. From ancient times the island was known for its wealth of minerals, which are still being mined today. At the Museum of Mining in Adamas, in two short films the islanders tell their own stories of life working in the mines, of the hardship during the German occupation, and the consolation of friendship and communal life.

Pro Tip: Book your family travel through Booking.com. They guarantee the best prices for any type of property and no booking fees!

One of Rod’s sea kayaking trips takes in a long abandoned sulfur mine. What a contrast in time and circumstance. The happy carefree sea kayakers of the twenty-first century looking at the working conditions of a former era. What was it like to work there in the blistering heat of summer, when the river was all dried up and it hadn’t rained for months? When the winds of winter blew fine particles of sand into their eyes and the rain poured down did they dream of escaping to America or Australia?

Sitting under a tamarisk tree eating one of Rod’s lunches of deliciously fresh tomatoes, cucumber, feta cheese, and ham on crusty brown bread with not a care in the world, the rusting rails and abandoned buildings behind the beach give a gentle history lesson to those inclined to listen.

When your host and guide is an affable type, easy to get on with, and interested in people it makes for a great family adventure holiday. When he is also darned good at what he does, sizing up his clients within the first fifteen minutes of arrival and planning the types of trip suitable for their experience and ability, it’s a winning formula. His equipment is excellent, with lovely high quality, light weight paddles and there’s even a child sized sea kayak for those among us who didn’t do much growing after the age of twelve.

What To Expect On a Six-Day Sea Kayaking Holiday

Depending on the abilities of the group and the direction and strength of the wind Rod chooses a different trip each day. Some trips involve long legs battling against the wind, while other more leisurely days see you paddle in and out of caves where the water is a translucent blue, so intense in its color that even as it drops from your paddle the color remains.

If the wind is from the south he might head out to the two islands off the north coast, pulling in to a landing stage which is so tiny you literally haul your boat up onto a ledge, before slipping back down into the perfectly still water, floating gently until the wake from the passing ferry rocks you gently back to life. Meanwhile the kids are probably leaping off the rocks shrieking for joy. For those with plenty of energy to spare, there’s a climb up the cliff to an abandoned light house and 360 degree views of sea and sky.

Perhaps you’ll enjoy sea kayaking down to the south of the island where all the majesty of nature is displayed in the soaring cliffs with their amazing variety of colored rocks, laid down over millions of years when the island was being formed by volcanic eruptions.

What is it about rocks that is so fascinating? The sounds of the words Bentonite, Kaolin, Basalt, Manganese conjures up a world of turmoil, explosions, eruptions, steaming and boiling, cooling and cracking.

Here on Milos you see the results of that awesome time. Sitting in your tiny boat below the cliffs you crane your head backwards, gazing in wonder at the power of nature and what it has created all around you. There are basalt columns covered in Tuf, a lovely creamy colored hardened volcanic ash. Perhaps on top of that there is a layer of conglomerate, literally a whole layer of stones and soil that are now rock solid. Then there could be dark red manganese contrasting with the Tuf and just to add even more interest perhaps right beside you in the water there will be the smell of sulfur or some steam rising in the gravelly sand on the shore, indicating the presence of the mineral.

Another of Rod’s sea kayaking trips includes a beach so inaccessible that two wooden ladders have been placed against the cliff, giving access only to the adventurous, or people arriving by boat. And then there’s the little rocky cove where you snorkel out to a cave, climb up inside its walls and out through a hole in the roof, from where you fling yourself back into the sea.

As the days go by Rod gets a good handle on his group, their abilities and interests, their sense of adventure or timidity and plans accordingly. The young and young at heart will leap from the highest cliffs, the history buffs will love the story that the old sulfur mine has to tell, the geologically minded will bombard their host with questions as each new rock formation presents itself.

A Day of Sea Kayaking Pairs Perfectly with These Island Delights

When your day of sea kayaking is done and you are showered and ready for food, it’s only a short walk to any number of tavernas, all serving the typical dishes of the island. Goat, rabbit and lamb are featured on many menus as well as more typical foods like beef and chicken.

If the sight of a whole octopus grilling away outside a restaurant on a barbecue might be a major turnoff for some, it is obviously very popular, and certainly an education in cultural differences.

Being a vegetarian is no problem on Milos. Stuffed aubergine, zucchini, vine leaves and tomatoes appear on most menus as well many types of salad and all manner of lightly fried vegetables.

Finally there’s the bread – real bread both brown and white. The danger is that you eat too much of it and don’t have room for the fresh fruit so often offered by your hosts, just as a thank you for your custom.

Getting there: Fly to Athens and then onward by a small plane to the island or take a ferry from Piraeus.

Accommodation: Rod does all-in packages which include bed, breakfast, and lunch. Some people choose to stay elsewhere and book-in for one or two days of sea kayaking. Olea Bay Hotel is a great choice for families who want all the amenities with a spectacular view and direct beach access. 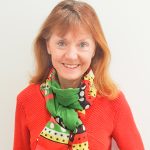 In a former life, Deirdre Davys was a Career Guidance Counselor. Nowadays she is a freelance writer, specializing in outdoor pursuits. Her articles on hill walking appear regularly in The Irish Times – Ireland’s premier newspaper. She has also written in The Metro, The Irish Mountain Log and Senior Times on activities as varied as zorbing, coasteering and cycling by the River Weser in Germany.