My son hikes with one goal in mind – to throw rocks in the water and watch them splash. When we hike, we walk slowly. Every rock we pass must be examined for suitability, and if it passes inspection (which it always does), it is then carried along until another more appropriate rock is found only a few feet later. The type of water does not matter. In my son?s eyes, lakes, rivers, even sidewalk puddles are all equally able to produce satisfactory splashes. The type of rock does not matter, either. Small pebbles and stones larger than his hands are all at the mercy of his quest to produce a bigger and better splash than the one before. When we near a body of water, he takes off running, baby brother and I chasing behind, yelling for him to wait. He throws the rock, turns toward me and grins. ?Woah! That was a big splash, Mama!? Then he is off again, searching for the next rock, the next splash, the next reason to smile.

I take the boys outside for many reasons. Mostly we are in search of sunshine and a way to burn off some boundless toddler energy before nap time. But I also want my sons to breathe fresh air, exercise growing bodies, and give them the confidence that comes with scaling a mountain. I want them to know the difference between a robin and a red-winged blackbird, and to appreciate both the might and the delicacy of nature. I want them to be a part of the world we live in. Once, I listened to two mothers discussing the anxiety of raising their children in a world full of fear and uncertainty. ?How can I protect her?? one asked. ?You can?t,? the other replied, ?but you can raise her so that if something bad happens, she will have the strength to move through.?

Parenting young children often feels like throwing rocks in the water. I lob my words out there, over and over, hoping they land below the surface. ?Just try the carrots.? ?Please be nice to your brother.? ?Don?t yell quite so loudly.? My son never seems to tire of throwing rocks in the water, although I, admittedly, do tire of the repetitive aspects of parenting. Changing one diaper after another. Reading the same book before bedtime five nights in a row. Packing up the same jelly sandwich to take on our hikes. My oldest child keeps throwing his rocks in the water in search of a spectacular splash, and I keep tossing out my efforts as well, hoping they make a small difference in his life.

He stands along the edge of a river bank, throwing one rock after another until I prod him to move along with the promise of another bridge or small beach just up the trail, where he can toss more pebbles into the water. Splash after splash after splash.

I can?t protect my children from the world; I can only give them the strength to move through it. And so we go outside, and I let a little boy throw rocks in the water for hours. He is soaking wet, dirty from head to toe, and yet his determination and concentration never wavers. Rocks fall beneath the water, and after the initial ripple, they are gone. I know it is not the rock that matters. With every throw, I watch him grow a little stronger, and a little more able to move through this world. 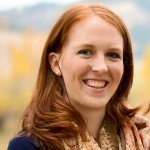 Jackie Semmens is the mother of two young boys, whom she is determined to get to nap at the same time and is willing to chase them over the hills of Helena, Mont., to ensure that it happens. She moved to Montana six years ago for her husband, John, and is slowly growing accustomed to the long winters. Jackie recently began blogging on living on the threshold of home and the outside world at AnAnchoredHope.