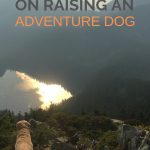 by John Soltys – For many of us, dogs are family. We celebrate their accomplishments, we fear for their safety, and we mourn their passing. And, just like we do with human children, we enjoy adventuring together.

In many cases, it’s dogs that begin our adventures in life and in the outdoors. Some of my earliest memories are about time spent as a child with the family dog in our backyard. After getting married and buying a house, getting our first dog, Tokul, was the next step in building a young family.

At the time I wasn’t much of a hiker. But a dog needs walks and even though we lived on a dirt road, there’s only so many times I could tolerate a boring stroll around the block. So we started going for walks in the woods. It turns out, this is also called “hiking,” and it became our passion.

For almost 12 years Tokul and I adventured throughout Washington. We hiked on established and maintained trails, bushwhacked through seemingly impenetrable thickets, climbed mountains, and snowshoed whenever the snow was deep enough.

For those 12 years Tokul was the most reliable and consistent adventure partner I had. She never wanted to sleep in, never complained about the food at camp, or balked at long days on the trail. The only times she refused to continue was when we tried to cross boulder fields of talus.

When Tokul was three we had our first human child. Far from being annoyed by the crying baby girl or feeling threatened, Tokul welcomed her (and the two that followed) into her pack. Tokul only slowed down after turning 10 and left us too soon just before her twelfth birthday. Knowing the importance of a canine presence in our family we adopted a “career-changed” service dog named, “Treen,” just before Tokul passed. (“Career-changed” means that although she was completely trained, she wasn’t perfectly suited for life as a service dog.) Treen was new to adventuring, but had barely any time to come up to speed before she was accompanying me on my twice-weekly hikes and backpacking trips with the kids.

4 Tips on Raising an Adventure Dog

Over the last 17 years of adventuring with dogs I’ve come to understand some important truths about our canine companions. Here are four of them.

Dogs generally don’t know how to say, “No,” or “Enough.” Dogs are pack animals and loyal to the leader of the pack. That’s you. If I lead my dog on a 15 mile hike up and down a mountain, my pack will follow. If I make camp near a lake swarming with mosquitoes, my dog will bed down in the ferns to hide from the insects. Because dogs won’t tell us it’s too much it’s up to the leader to see when an adventure is going too far and change plans. Only twice have my dogs told me they were “done.”

On a day-after-Thanksgiving hike Tokul slipped on a narrow, rock ridge. She didn’t fall, but the scare was enough that she refused to continue. I wrapped her in a fleece jacket and fed her my lunch. She recovered enough to return to the trailhead and play in a creek along the way.

On a particularly grueling spring hike only five months after Treen joined the family she lay down and curled up in the middle of the trail during a water break. We still had a few miles to go to the trailhead, but I was with her in spirit. It had been a hard day so we stayed at that creek a little longer than necessary to give everyone a break. Just like humans, dogs can take in the scenery. Or maybe it’s just curiosity about what they see. Or they’re looking for something to eat or chase or pee on. Whatever it actually is, dogs will often look at the same views as you or I. There are many photos of me and my dog in perfect Instagram poses looking into the distance. (The only difference is she’s always authentic.)

Dogs don’t need a reason to go on an adventure. They don’t care about climbing to the top of a mountain or setting a new PR on a trail run. Dogs just love being outside. My dogs would rather spend their afternoon chewing sticks in the backyard than lying on a bed in the family room. They’re happy walking the same trail we’ve walked hundreds of times before, because dogs are the perfect embodiment of the idea that it’s all about the journey rather than the destination.

Never let us forget that dogs are animals. It’s easy to lose sight of the fact that these furry beings we keep at our side are just recently removed from the wolves that hunted our ancestors. While they are domesticated and no longer see us as their prey, they are still animals driven by instinct. And instinct usually takes over when a new situation is presented.

Tokul and I were hiking up Hex Mountain and I was packing a junior adventurer on my back. The trail followed a narrow saddle with dense trees in the valleys on either side. 50 feet ahead of us a deer bounded out of the woods and stopped on the trail. Tokul, one of the gentlest dogs I’ve ever known, ducked down and the hair on her back stood up. She growled in a way that made it perfectly clear the deer would not pass her to harm her family. (The deer disappeared into the trees and Tokul returned to her gentle self.)

While snowshoeing at night, Treen sprinted ahead and into the brush on the side of the trail. When she emerged she held a small rabbit softly in her mouth. I was stunned and so was Treen. She dropped the rabbit at my feet and we both watched it hop back into the darkness. Although she’d been trained to suppress her canine nature, it took control when she sensed the rabbit even if only for a few moments.

To be sure, these four truths don’t come close to truly describing what it means to adventure with a dog as part of your family. The only way to really understand is to grab the leash and head outside. A Tribute to Treen, the Adventure Dog

Before publication, Treen passed away after a brief battle with cancer. A puppy named Tinkham now wears her adventure collar. I will forever see Treen standing on the summit of a mountain watching the sun set. Roll in the snow to your heart’s content, sweet Treen. You can celebrate Treen with us here. John Soltys is a father, a husband, and adventurer. You can find him and his family where the highway climbs into the mountains, tucked against the river, at the end of a long dirt road. He writes at moosefish.com and elsewhere on the Internet: Twitter, Instagram, and Facebook.