Under the shade of her awning, Navajo Native American Bertha Elkriver pulls a small ball of dough from the bucket next to her propane stove. She finesses the dough with experienced hands, pulling it into a disc shape, and with a quick movement pokes a small hole with her finger in the center of the dough before laying it gently into the cast-iron skillet of hot oil. 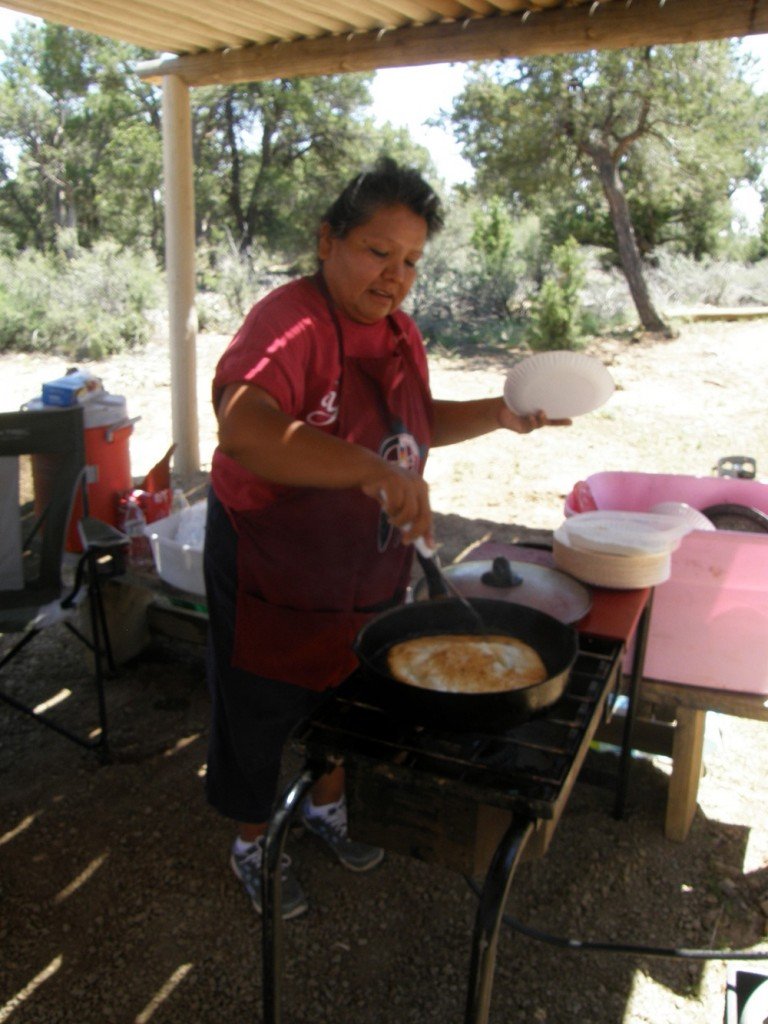 She tells me she drives from her home not far from the base of Sleeping Ute Mountain each day, and the dough rises in the bucket during her drive (about 1 hour). It?s a hot day in mid-June, and inside Mesa Verde National Park she and her husband, Mike Hayes, a Ute Indian, sell fry bread until the bucket of dough is empty, teaching customers about the cooking process along the way. Their young daughter helps by running a pizza cutter across the bread, cutting it into fourths and passing out napkins, while also learning to continue the tradition of her ancestors.

Elkriver has been making fry bread since she was a young girl, learning alongside her grandmother with the same basic recipe and method as generations of Navajo (also called Din?) and Ute before her. The ingredients in traditional fry bread are those provided to many Native Americans when they were moved onto reservations, circa late 1800s, and the U.S. Government provided commodity foods such as flour, lard or corn oil, salt, and sugar. Women in the tribes began to experiment with these rations, and fry bread was created. 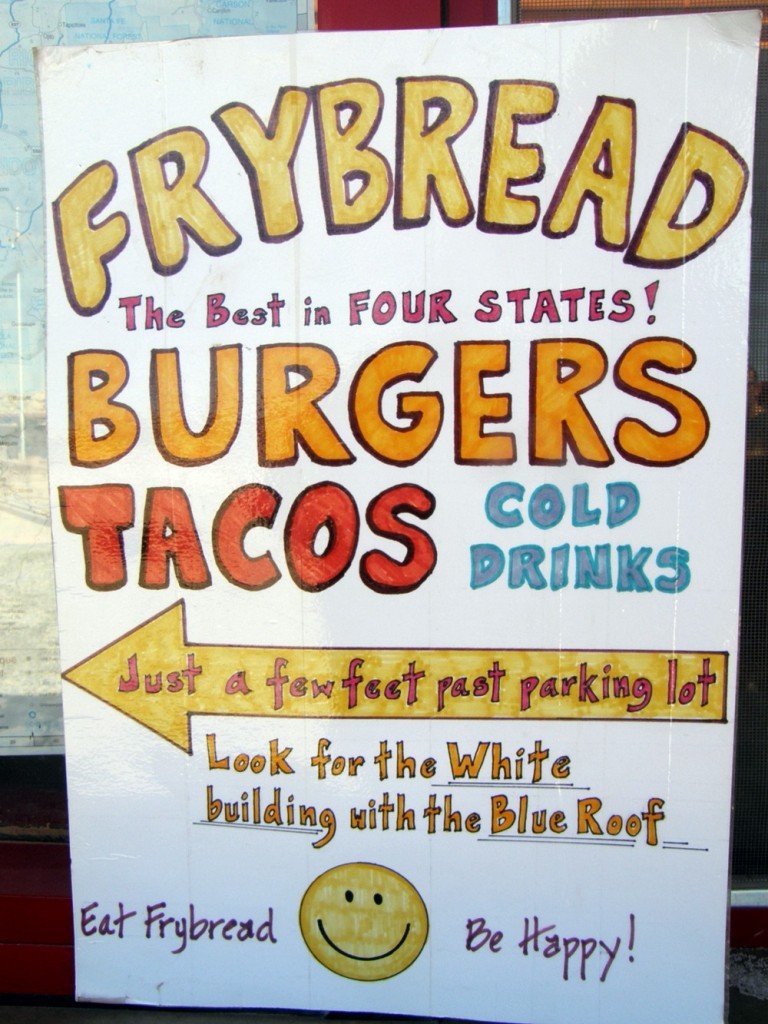 For many like Elkriver, the fry bread is a sacred tradition that represents the suffering of their ancestors, a legacy her tribe is committed to preserving. As a Navajo teacher in the community, in fact, she wrote an essay on the process of making fry bread entirely in the Navajo language, one of the many ways this tribe is keeping their heritage alive.

The fry bread Elkriver cooks is ready but too hot to eat right away; I drizzle honey over my order and wait for it to cool enough to taste. I inhale the smell of fresh, fried bread, and step back as other customers are served, one pan at a time. The combination of warm bread and sweet honey was so intoxicating that I had already taken a few bites before realizing I needed to take a photo.

Fry bread is typically served as a treat with sweet toppings such as honey, cinnamon or sugar (or even a dash of salt). For myself, I can imagine it tasting delightful with a big scoop of vanilla ice cream on top.

But the delicacy is more than a treat to savor as a dessert or afternoon snack. Fry bread is also wonderful topped with taco fillings of ground beef, beans, and salsa, or with shredded chicken and green chili topped with cheese.

The couple also tells me about other traditional dishes that they continue to make, honoring and upholding traditions. For instance, Deer Berry Pudding is made from the red berries found on bushes seen at the entrance to Mesa Verde. Named for the berries the deer are known to enjoy in spring, the pudding is served often at tribal ceremonies.

Hayes tells me his favorite traditional dish, however, is Blue Corn Mush, a blue cornmeal dish made from the plentiful blue corn grown throughout the Southwestern U.S. and Four Corners area. It?s cooked as you would oatmeal, but the secret is the seasoning of ashes from a burned juniper bush.

Lending a bold flavor, juniper ash is often used enough in tribal dishes that many Native Americans burn a significant amount of the bush at one time to have ashes on hand to add to recipes. As well, the ash causes a chemical reaction that increases Vitamin A and calcium, secretly turning a traditional meal like Deer Berry Pudding into a nutritional one.

Our trip to Mesa Verde and The Four Corners was filled with adventure, including experiencing the local flavors of Southwestern Colorado. And with all the choices, fry bread was by far the most popular. Buying a piece of handmade jewelry, pottery or a dream catcher will allow you a visible reminder of the people of the area. But the taste of the fry bread, hot and crispy, sweet with honey, is just something you can?t keep on your taste buds long enough. You have to enjoy one to truly understand the wonderfulness of it.

1. In a medium-sized bowl, mix together the dry ingredients. Add oil, then water. Knead dough by hand until blended. (It helps if you wet your hands first.)

2. Cover bowl and let dough sit at room temperature for one hour. When ready, heat the oil in a cast-iron or sturdy skillet until hot, about 375?.

3. Divide the dough into 8-10 equal-sized balls. Using your hands, shape and stretch the dough, pulling it into a 6? disc. Poke a fingertip through the center of the dough, creating a hole to allow the oil to flow through while cooking.

4. Slowly place the dough in the hot oil and fry until the edges begin to brown.

5. Using tongs or a fork to flip the bread over and fry for another 1-2 minutes until browned.

*This recipe has many variations, and some call for yeast, powdered milk or sugar. Basically it can be altered to your taste and likely also be made with gluten-free flour.

**For locals around the Four Corners area, Blue Bird Flour is the most popular flour used to make fry bread. Produced at the Cortez Milling Company located in Cortez, Colo., locally grown wheat is ground into flour then packaged primarily into cloth sacks that are often repurposed into purses or totes, kitchen towels, pillowcases and clothing. In fact, Blue Bird Flour sacks are so popular that vintage ones are often made into collectible items and sold online at sites like Etsy. 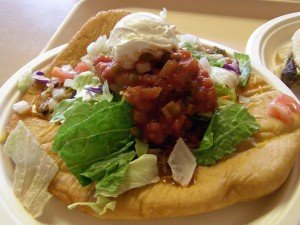 1. In a skillet over medium heat, cook the ground chicken or turkey until no longer pink. Drain fat if necessary.

2. Sprinkle taco seasoning over meat, then add water and simmer until blended.

3. In a small saucepan, heat the pinto beans over low heat, adding a little water to prevent burning.

4. Top each round of fry bread with a scoop of meat, pinto beans and cheese. Add other toppings as desired. Enjoy! 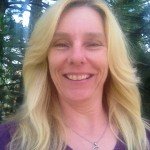 Peggy Bogaard-Lapp is a wife, mother, youthful grandmother, lifelong writer, motorcycle enthusiast and outdoor-adventure seeker. A native of Colorado, she has been camping since she was young, and, following in her father?s wandering footsteps, spends lots of free time with her family in the Rocky Mountains.