I believe in wonder. Daily life is filled with the mundane: laundry, oil changes, dentist appointments, filtering spam. Routine. Over time, it erodes my spirit, eating away at the core of well-being. So whenever I have an opportunity, I grasp at the concept of wonder. It can be a mother bird feeding her young, beak-to-beak; a particularly spectacular flower, or a sunset so colorful it can?t be painted realistically.

Vacations are a good time to restore wonder. Last summer, my two kids and I took a cruise to Alaska. With my 50th birthday looming large, I was determined to check something off a long bucket list. I also fear that summers with my children are numbered. Many of my son?s college classmates stayed on campus or found internships away from home. Like most mothers, I want to show my children the world–or as much of it as my budget will allow–and the clock has started ticking double-time.

Alaska is hard to beat in terms of wonder. Giant, untouched landscapes that roll on endlessly, reaching toward that blue, blue sky, cascading into water that teems with whales, seals, otters Our day in Glacier Bay was easily the most beautiful of my life: sunshine illuminating the white peaks, Margerie Glacier calving obediently right before our cruise ship, with haunting cracks and sudden thunders. I didn?t know you could spend an entire day in awe. We were sunburned and we were wiser. The world holds such wonders!

But the biggest wonder was yet to come, our larger lesson still waiting in the wings. Toward the end of the trip, we stopped in Ketchikan, a former logging community turned tourist town. ?I?d saved the best shore excursion for last, a flight-seeing expedition over Misty Fjords National Monument. My kids had never flown in a small plane and both had tagged this as their number one excursion, should money permit.

I?m still shaking my head at the beauty of that flight. We were on a small floatplane, just six of us plus the pilot. My son sat in the copilot?s seat; I watched his neck as he craned to see everything, to take in the vistas before him. My college boy, ready to find his own place in life, expanding his horizons in the most literal way. I patted myself on my momma back–showing them the world, paving the way.

There is no better way to see Misty Fjords than from a floatplane, unless you have a sailboat and two weeks? time. I was unprepared for the beauty: the sheer rock cliffs that shoot straight up in the air, dozens of waterfalls finding their way back to the ocean, the startling spring green of the vegetation where land meets inlet. It was breathtaking. Headphones and plane noise prevented me from communicating with my kids, but I could feel their enthusiasm and sense their own wonder. I was full with life. A quote by Henry David Thoreau floated around in my head as we swooped along those cliffs: ?I went to the woods because I wished to live deliberately…and not, when I came to die, discover that I had not lived.? I couldn?t remember it all, but that final phrase kept circling in my brain. Too much routine–laundry, groceries– I needed more living. I vowed to eke more out of each day, to live life more fully.

Our pilot, Marcus, landed on one of the inlets so we could climb out on the pontoon and take in the stillness. My children?s faces were aglow, my daughter stating, ?This is by far the coolest thing I?ve ever done.? The flight lasted an hour, and while longer would have been nice, it didn?t really matter. The wonder had been achieved, the life lesson taught. We arrived back at the hangar and disembarked as the next passengers waited. I was deeply, almost embarrassingly, grateful to Marcus for having given us this profound experience. I tipped him with a $20, knowing it was insignificant, paltry and perhaps even insulting. Money was so meaningless compared to what we?d seen, to the lessons I had learned (and to discover I had not lived). He accepted graciously, indicating it wasn?t necessary, and tucked the folded bill into his pocket.

?I feel like a changed person after that,? my daughter proclaimed–always insightful, always succinct. I agreed. Live life, celebrate wonder, explore! An hour later, as we waited aboard the cruise ship to disembark from Ketchikan, we learned that one of the floatplanes had gone missing. Our departure was delayed as we awaited news of our eight fellow ship passengers. Over the next few hours, their fate became clear. On a similar floatplane, from the same company, they had crashed into a rock wall and died. Died. Gone. Period.

How does beauty turn to tragedy so quickly? This enchanted place, this spot of wonder, became the final resting spots for eight people walking amongst us earlier in the day, plus their pilot. My heart ached for the friends and family faced with this unexpected grief. My thoughts quickly turned selfish. In seeking beauty, in search of life, had I, previously-patting-self-on-back mother, put my children in harm?s way? That could have been us.

This, then, was Alaska. Stunning beauty, shocking tragedy. Abundant life alongside sudden death. I want my children to seek out special experiences. Fear should not stop them from fully living. I don?t advocate bungee-jumping out of helicopters, but moderate danger is sometimes necessary when exploring. At 14 and 19, they are smart and thoughtful, and I believe they will sort this out eventually. But I can?t help but wonder how this complicated experience will shape them. The answer to that won?t be known for a while.

In the meantime, I ponder the meaning of it all. It wasn?t our time. For us, it was beauty and wonder. I will try to simply appreciate the gift Marcus gave us that day and the reminder to live life richly, perhaps especially as it can end so abruptly. I think about the horror that faced him later that day, as he and other pilots went out in search of that missing plane and their doomed coworker, my folded $20 in his pocket. I hope it served as a talisman–however meager–a reminder to him that for that hour, and for the future, he had given us unbridled beauty and inspiration. 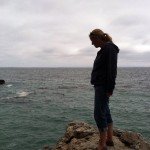 Andrea Friederici Ross is the author of Let the Lions Roar! The Evolution of Brookfield Zoo and a frequent contributor to the Center for Humans and Nature City Creatures blog. She is currently working on a novel. ?