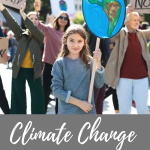 by Erin Kirkland and Stephanie Harper – The climate change headlines are ominous: Unprecedented heat waves, violent storms, melting sea ice, reductions of species. For any adult watching or reading news reports these days, the term “climate change” is a sobering reminder that Earth is undergoing a swift and drastic shift in environments in every region. So, how do you talk to your kids about climate change?

The idea of climate change is also confusing, especially for children who may not understand the emotions and potential outcomes of action — or inaction — on the part of grownups. Each generation has its own polarizing social soapboxes, of course. The 1970’s brought Woodsy the Owl to every television screen in America, encouraging kids to “Give a hoot, don’t pollute!” The 1980’s and early 90’s were all about the AIDS crisis and anti-nuclear proliferation.

But where youth of yesterday were limited to school clubs, classrooms, or the rotary-dial telephone to disseminate and process information, a 21st century kid has access to an overload of images and data, geared toward even the youngest consumers.

Tangible and now-familiar actions like Reduce, Reuse, and Recycle are mantras taught at school or home (and have even been expanded to include the term “Refuse”). Younger kids make posters and participate in litter pick-up activities at school, or take part in a bicycle or walking rally.

On the other end of the climate spectrum, teens like 16 year-old Greta Thunburg from Sweden are leading climate strikes and attending global summits, scolding world leaders for their apparent indifference.

But how do average families wade through the mountains of information related to climate change, and reach kids of varying ages, allowing them to invest in lifelong best practices? Perhaps the most logical place to start is with the basics of weather, climate, and the tracking of both.

Is an area of Earth normally cold and wet? Hot and dry? A little of both? Scientists carefully monitor regions and track conditions over time using graphs and charts to show differences and any changes over the years.

Science-supported facts should certainly be a part of climate conversation with kids. According to the Center for Climate and Energy Solutions, an independent non-profit organization dedicated to offering practical solutions for climate change, carbon emissions have been an issue since the start of the Industrial Revolution, and have increased over time (as much as 90%) since 1970, and since 1900 has continued to rise yearly.

Greenhouse gases caused by carbon dioxide (CO2) traps the sun’s heat, causing different changes to the planet’s regional climates. The increased burning of fossil fuels for heat, power, or transportation is partly to blame, but the deforestation of millions of acres of trees also means the planet can’t keep up with so much carbon dioxide typically absorbed by plants. Earth’s land and sea spaces are warming at alarming rates, ultimately changing weather patterns and the climate zones in which we live.

When introducing concepts of  climate and climate change to kids, it’s important to focus on age-appropriate information and a relation to the everyday sphere of play and life. Lia Keller, mom of two elementary-age boys and founder of the Alaska Forest School, an all-outdoor preschool in Anchorage, says the way she approaches climate and its changes with different age groups is different.

| Related: Is Forest School Right for Your Child? |

“With Forest School, the focus is often on animals and the challenges they face with a changing climate,” she said. “Polar bears are having trouble finding ice, caribou have to migrate farther for food, all because the world is changing.”

When asked what they can do to help out Alaska’s animals, Keller says the kids come up with ideas like reusing water bottles, walking or biking to the store or school, and recycling.

Keller’s sons, both in grade school, know more about climate change through classroom projects and are quite concerned about the tangible changes they see. Alaska had one of its warmest summers on record in 2019, with more than two million acres of land burned by wildfires in the southcentral section of the state, close to the city of Anchorage.

“My boys get very upset about it,” Keller says. “They get scared with talk of rising water and increasingly (strong) storms. They love to fish and hunt, and are scared about salmon dying from warmer water.”

Keller mitigates some of their fear through action, encouraging a plan of “Do your part where you are” through biking as much as possible instead of driving, conserving electricity, and eating locally to reduce their carbon footprint (Alaska receives 90% of its grocery items from the Lower 48 states, often delivered by airplane or tug barge).

6 Ways To Encourage a Climate Change Dialogue with Kids

The point is to empower kids through action, no matter their age. Below are several other ideas for creative activities related to the concepts of climate, environment, and data.

The choice to discuss a changing climate with children is a complex decision that must be made with thoughtfulness and a nod toward age-appropriate action. It’s not going to be easy. But as the late John F. Kennedy said: “Children are living messages sent to a time we will not see.”

Let’s give them the tools to become tomorrow’s global leaders.

Erin Kirkland is an author and freelance writer from Anchorage, Alaska, focusing on kid-friendly travel and outdoor recreation in the 49th state.