Gregory Morse had no idea that a summer 2013 trip to the USS Midway aircraft carrier in San Diego would be a life-changing experience. The Long Beach, Calif., father of three had opted for an audio tour of the ship for his family, including his two oldest kids, then ages eight and six, despite skepticism it would hold their attention.

But once they put on the headphones and started listening, they were hooked, he says. We spent hours on the ship. It was clear to me that good storytelling would keep them engaged.

So when the family embarked that summer on an RV vacation in Yellowstone National Park, Morse sought a similar audio experience without luck. Instead of appreciating and learning about the stunning roads, scenery and history, he says, his wife and he were juggling maps and guidebooks.

That’s when I knew I had to develop a storytelling experience that would play through our smartphone, keep the kids entertained, and allow us to keep our eyes on the road and the sights,? Morse says.

So he began developing the GPS-powered, mobile app Just Ahead, which transforms smartphones into a hands-free tour guide of some of the most stunning spots in the U.S.

?It?s been a labor of love and a whole lot of fun learning about the natural and cultural heritage of the United States, supporting our national parks and other public lands, says Morse, CEO of Just Ahead.

Each includes surrounding areas and approach roads, so each guide is truly a road trip, says Bob Howells, the app’s editor and lead writer. We even have one audio tour that’s not really a park guide but rather wholly a road trip: Interstate 15 from Los Angeles to St. George, Utah, which includes Las Vegas and Hoover Dam. It also connects with our Death Valley and Zion guides.

Not only are the audio guides for each destination professionally written and narrated offering travelers and their families fun, informative destination details but because the app relies on GPS, users don’t need to rely on cell-phone coverage or Internet access. As well, Just Ahead points out a Park’s noteworthy features while also helping drivers avoid getting lost.

Some of the greatest shared experiences I’ve had with my family have been in national parks; they represent the very best of America, Morse says. We do our best to bring them to life for kids and adults alike in our tours.

So far, it seems to be working. After one year of production, Just Ahead was voted in 2016 one of the top-five Best New Travel Apps by USA Today 10 Best readers. It has also been named Best Travel App by the North American Travel Journalists Association and Best App by the editors of Sunset magazine.

And there are currently more national parks being added to the app’s repertoire, like the Great Smoky Mountains National Park in North Carolina and Tennessee, and South Dakota’s Mount Rushmore, the Black Hills and Badlands National Park.

Morse says he’s excited his product has the potential to help millions of travelers be more informed about the natural, historical and cultural resources of our world. But he’s also proud to contribute preserving these majestic lands.

I believe that people who are informed are more likely to care about, preserve and protect these special places, he says. 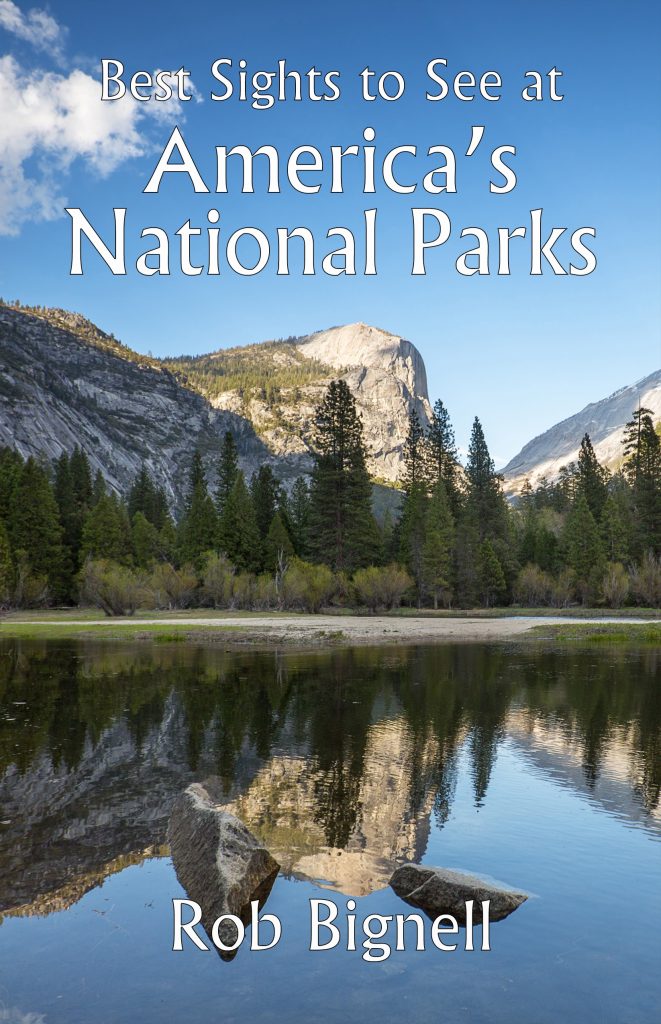 Hittin’ the Trail: Best sights to see at America’s National Parks is one of many outdoor-themed guidebooks written by Rob Bignell, a hiking dad and outdoor companion to son, Kieran. His latest book, featuring the 54 most accessible national parks, was released in 2015 and features a comprehensive, simple view of our nation’s favorite outdoor recreation destinations. The National Park Service officially turned 100 this week, so there’s no better time to start planning your family’s next park vacation.

With simple hikes and highlights that most park visitors seek, this guidebook (published by Atiswinic Press) won’t appease the hardcore park enthusiast or parent who wants detailed instructions about history, wildlife, and/or a link to a backcountry access permit. Rather, Bignell took a broader approach, skimming the surface and hopefully encouraging future visits to dig deeper into the wonders of a favorite park, or to encourage a farther reach to unexplored locations.

Also included in the book are suggestions for families unsure about where to begin their national park adventures. Bignell thoughtfully breaks down the options by interest, location, season, and cost, and adds a kid-friendly touch to each destination. Flora and fauna are mentioned, as are creatures to spot in each unique geographic park location. Overall, Bignell does a good job of mentioning the highlights, and to be honest, that’s what most park visitors are after.

Hittin’ the Trail: Best sights to see at America’s National Parks retails for $11.95, or as an e-book for $1.99. Both editions are available via Amazon.com.

Heather Mundt is contributing editor for Outdoor Families Magazine and authors her blog, Momfari. She lives in Colorado.

Erin Kirkland is managing editor for Outdoor Families Magazine and publishes the website AKontheGO. Author of Alaska On the Go: Exploring the 49th state with children, she lives, works, and plays in Alaska.?