Editor’s Note: The all-female staff of Outdoor Families Magazine understands the fortitude and tenacity it takes to carve out space in a largely male-dominated industry. Don’t get us wrong, we love our gentlemanly counterparts and their equally awesome stories, but we are also passionate about closing the gear gap. We are proud to partner with REI as disruptors of the status quo, to reinforce the notion that the outdoors is a place to opt out of cultural pressures to conform. It is with extreme pleasure that we introduce you to our newest Contributing Editor, Melynda Harrison. She is a Force of Nature.

by Melynda Harrison – When I was 20-years-old I worked as a Wilderness Ranger for the Forest Service. For ten days at a time, I would walk along the John Muir Trail, the Pacific Crest Trail, and many of the lesser known paths between Yosemite National Park and Mammoth, California on the east side of the Sierra Nevada range. It was the greatest job I’ve ever had.

I would check campsites and backpacker’s permits, clean water bars and move rocks off the trail, but a lot of the time I was just walking among granite boulders, through flower strewn meadows, and around mountain lakes. I was sitting in my campsite watching the alpenglow turn the mountains pink. Sometimes I’d climb a peak just to make sure everything was ok up there.

It was the early 90s and I looked younger than my already young years. And while three out of four rangers in our district were women, the people I ran into on the trail were often surprised to see me there in uniform. “Are you out here alone?” “What if something happens?” “Aren’t you scared?” Honestly, I felt less lonely and less afraid than when walking around a city. I was soaking in sunshine and tree chemicals, moving my body, and feeling one hundred percent at home and happy. I was competent and living the dream. 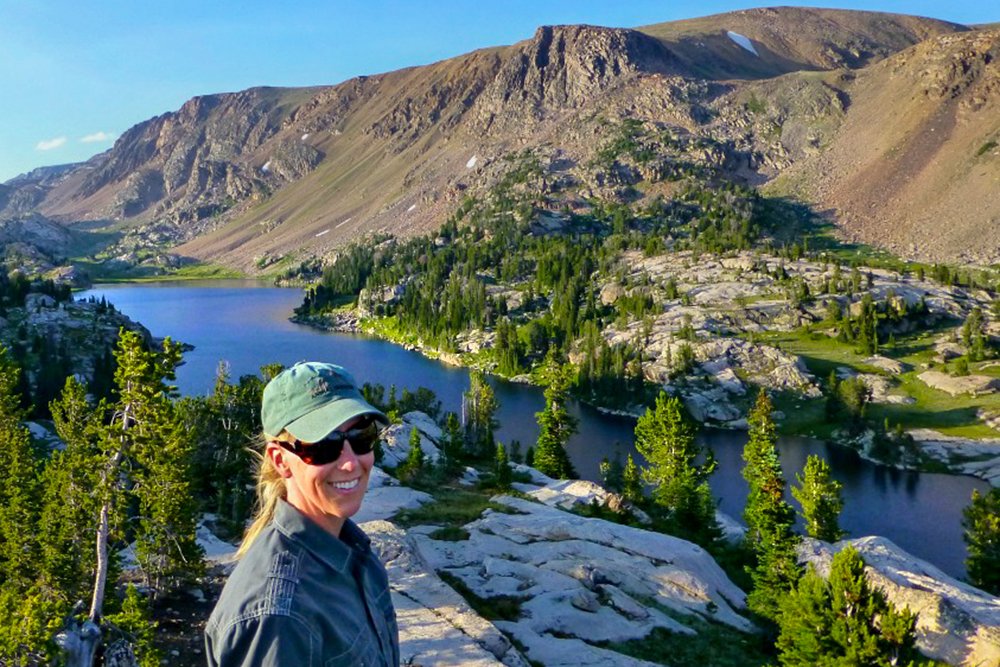 In Japan, they practice something called Shinrinyoko, or forest bathing. It’s about absorbing the forest atmosphere. Plants release phytoncides to protect themselves from insects and disease. When we breathe in these antibacterial and antifungal aerosols, our body responds by increasing the number and activity of a type of white blood cell that kills tumor- and virus-infected cells in our bodies. These tree chemicals also reduce stress and provide an overall sense of well-being. Even if I didn’t know the reasoning, I knew getting outside made me a better, happier person.

Since my days as a Wilderness Ranger, I’ve worked as a cave guide, outdoor educator, and outdoor trip leader. I didn’t set out to forest bathe, I just love being outside and want to encourage other people to do it, too. Everyone should feel the goodness that comes from being outside.

Some of my favorite times come from playing outdoors with my girlfriends. Heather and I plan an annual summer backpacking trip and a winter cross-country skiing outing. We live on opposite ends of Yellowstone and live different lives, but we meet in the park, slide on trail shoes or skis, and are back into best buddies mode. With Heather, I’ve backpacked through the “Waterfall Corner” of Yellowstone. We’ve felt the rush of dancing water, eaten berries from the bush, and soaked in remote hot springs. We’ve skied past bubbling hot springs, along the Grand Canyon of the Yellowstone, and through whiteouts so thick we could barely see in front of us. We were doing something good for ourselves, and strengthening the already strong bond of our friendship. 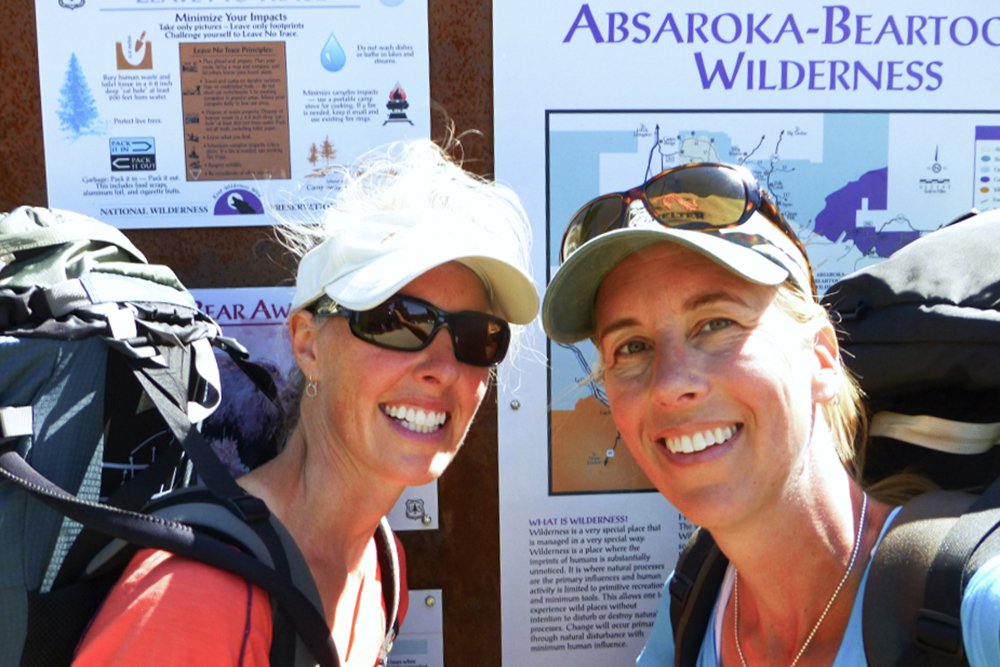 With another friend, Mariann, I wrote guidebook to cross-country skiing in southwest Montana. In order to “research” the book, we had to get a lot of miles under our touring skis. We have a knack for skiing trails that just aren’t made for cross-country skis, but instead made for big laughs and funny stories. In summer, she’d push me to hike a little farther than I want to and I was always grateful for it.

These days my hiking, skiing, and forest bathing usually takes place with my kids. My family and I are traveling through Europe for a year and I don’t have girlfriends nearby. Anders, my 10-year-old son, has the same enthusiasm and drive to get up mountains and down trails as I do.

As any mom knows, recreating with your kids is totally different than going solo or with friends. You are a guide, teacher, medic, cheerleader, psychologist, porter, and chef. Not only do I have to get myself up the mountain safely and enjoyably, but I have to get another person – one that I deeply love—up and down safely. My hiking companion is awesome, but he needs to be reminded to eat, drink, watch his step, put on a jacket, take off a hat. I watch his mood and energy level closer than my own. 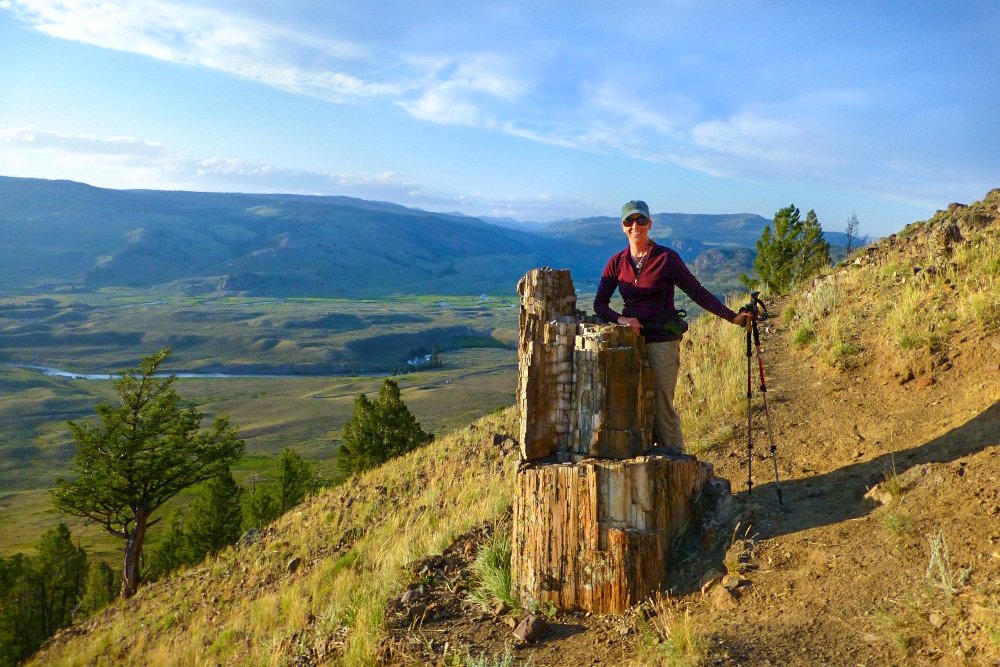 In the German Alps, Anders and I climbed snowy Predigtstuhl mountain. At first the trail was just a steep (closed) dirt road. Then it became a mountain trail, and eventually we were pulling ourselves over rock surfaces with cables and climbing metal stairs bolted to the mountain. We crossed snowfields that wouldn’t have given me pause had I been with Heather or Mariann, but with Anders, the stakes were higher. He depended on me to get us to the top. We did, of course, and met his brother and dad at the top of the cable car on the other side of the mountain.

More than climbing a mountain and showing my kids how being outside makes everything better, I am shaping their idea of what an outdoorsperson looks like. They might see men on magazine covers, but in real life they see a middle aged woman making it a priority to get outside everyday anywhere we are in the world. They see a woman who was a Wilderness Ranger, cave guide, and outdoor trip leader.

As the primary outdoorsperson in our family, I am showing both of my boys that women are strong, capable, and belong outside. My hope is that this transfers to what they believe and expect from their friends and mates. They’ll know that women belong in the phytoncide-rich air walking up the side of a mountain.

Disclaimer: This post is sponsored by REI and their Force of Nature campaign. 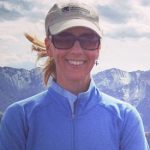 Melynda Harrison is contributing editor to Outdoor Families Magazine and writes for numerous publications including Big Sky Journal and Montana Parent. Her company YellowstoneTrips.com, specializing in Yellowstone travel. Currently, she is traveling through Europe with her family. Learn more at travelingmel.com, on YouTube, and Instagram.