?Mom? What are those pink things underneath that cow?s tail?? my daughter asked a few weeks ago as we sat watching a herd of bulls in the field across the street. Drawing from a legion of parental advice columns, I answered only the question I was asked, hoping that was the end of it. I was NOT ready for the inevitable, ?What do they do?? Turns out it was the end of it because my son started towards an electric fence, ignoring my shouts to stop. I made a dive for him but I wasn?t fast enough and the poor kid learned a life lesson about fences that tick.

We are not in Alaska anymore. At home, bovines in their electrified enclosures are few and far between, so when my two year-old asked to go see the cows, we obliged. Cows are new to him after, all. But then, everything feels new for us these days.

Nine weeks ago, looking to make the most of a contractual non-compete clause that barred my husband from working in our area for a year, we packed up and moved to the South Island of New Zealand. We had five years to decide what to do on this yearlong adventure and we tossed around five years worth of options. In the end, we chose New Zealand, an outdoor paradise filled with progressive, ingenious people. It was the kids finally cemented our decision; we reasoned that at this point in their lives, a vacation to New Zealand would be nothing but a footnote, but a two-year stay would be a whole chapter.

They say that you?re never more than 80 miles from the sea in New Zealand, so that?s where we decided to start our story. After we settled into our new house and figured out the basics of living “down under,” we got into our wee car and drove to the beach. The kids were thrilled. Water comfortable enough to swim in and miles of sand to sculpt; what more could two little Alaskans want? During our first couple of weeks, we spent our mornings at the beach. If the afternoon winds kicked up, we went home for naps only to head out again in the evenings to explore our new home.

When we took our kids to a beach in Alaska, we brought along laminated cards with pictures and names of creatures that can be found in the intertidal zones, and my kids had a lot of fun interacting with the beach like this. We carried the practice over to New Zealand as well, finding all sorts of new species of crabs, seaweeds and mollusks.

Our new town, Oamaru, is set in farm country surrounded by fields of sheep, dairy cows, beef cattle, deer and goats. To Alaskan kids, fields full of animals are fascinating, and for some reason (I blame my husband), the children started shouting, ?Sheeeeep!? when we drive past a pasture full of grazing –yes, sheep. There are a lot of pastures of grazing sheep down here. A lot.

Some of the irritations of our early weeks in New Zealand turned into big positives for us, however. For instance, in parts of the South Island, businesses grind to a halt around Christmas, and because of this, we spent six weeks waiting for Internet to be installed in our new house. That forced us to use the only Wi-FI signal in the area that didn?t cost a flat white and two fluffies, the library (a flat white is a $4 cup of coffee that is a cross between a latte and an espresso; a fluffy is a kids? drink made with foamed milk, shaved chocolate and two of the best marshmallows you?ll ever eat. I have yet to find a plain cup of coffee down here). We ended up meeting the head librarian while surfing the Web one day, and he invited us to dinner, where we discovered that he and my husband share a passion for fishing and a taste for ice cream. A spearfishing trip is in the works; something that my husband would probably never do on his own. No doubt it will be followed by ice cream. (If you ever visit New Zealand, go for the Hokie Pokie ice cream. Trust me on this.)

On another morning at the library we met an American family spending a few months working down here. We set up an arrangement whereby we take turns watching each other’s kids for an evening each week, giving the adults a night to enjoy their own activities, like spending time soaking in the private hot tubs at Old Bones Lodge just outside of town. There?s nothing quite like toasting a new adventure in a hot tub overlooking the sea with a cool glass of New Zealand bubbly in hand and the Southern Cross shining above.

It?s been nine weeks, and we?ve barely scratched the surface of this amazing place. Slowly, very slowly, we are starting to build our network of friends and create a new life for ourselves, learning some powerful life lessons along the way. Alaska is hard to beat, but New Zealand, with its rugged beauty, cheerful people, and amazing food is definitely giving it a run. 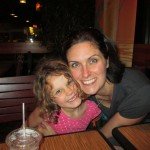 Sarah Richardson is a freelance writer and mother of two children. Formerly from Homer, Alaska, Sarah and her husband currently live in Omaru, New Zealand.?