by Erin McKittrick – [ Enter: Day 14 of 49(ish) of our family’s 300-mile wilderness expedition ] The clouds slipped off the sun. Lituya, my four-year-old, leaned back into the raft, legs propped on my husband Hig’s lap, arms spread wide to embrace that yellow beam.

Katmai, my six-year-old, was in my raft, making the most of his turn with the potato chips. My mother had her own raft. Our boats were packrafts; five-pound inflatable wonders light enough to carry over mountain passes, and tough enough to carry us across ocean passes.

Our meadow of sunshine was a thick tangle of kelp in the lee of a towering rock, crouched in the middle of a channel between two of Alaska‘s Aleutian Islands.

“It always looks better when the sun comes out,” my mom remarked.

Waves looked less forbidding when sun sparked off their crests. The currents looked less swirly, the shores less far, the puffins on the rock above us plumper and more adorable.

The five of us were a mile from Umnak Island and three miles from Unalaska Island, two weeks into a seven week, three hundred mile wilderness expedition. We’d been stalled in the lee of this rocky island for two hours already, calculating whether it was safe to paddle across.

When people hear about our expeditions, this is what scares them. Waves and wind and tidal rips. Big incontrovertible risks, rolling towards small and precious children. So we calculated currents, wave heights, and contingencies—weighing the risk the world posed to our kids. But that’s just regular parenting.

Expedition parenting begins when the boat lands, and we must cross dozens or hundreds of miles on preschooler legs. On the ocean, the kids rely on us. On land, we all rely on each other.

Lituya wore yellow bib rainpants, disheveled orange braids, and a nearly-empty purple backpack. She bent down to pluck a pair of bright red nagoonberries from the tundra. One for her. One for her colorblind dad. Then a fistful of wild flowers.

Katmai’s pack was weighed down with weeks of treasures; beach-worn blue stones, pockmarked pumice, and a single sturdy cow bone he was determined to carry to the end. The end was still a month away, on the far end of a nearly unpopulated island.

Unalaska Island was scribbled in black cliffs and bright green tundra. Waterfalls spread like sparkling dresses over ancient lava cliffs. Below them, pink salmon thronged the creeks, leaving drift lines of the dead along the banks. Surf broke against jumbled reefs, which thrust from the ocean like the spines of a dragon.

To Katmai, the island was a dragon. This ‘mountain dragon’ was born in Canada, and as it flew, its trees toppled and its animals scattered along the coast, leaving only the foxes, their claws clinging to wet tundra and the scrubby trunks of blueberry bushes.

Mountain dragons, volcano-proof fairies, misunderstood sea monsters… The kids’ stories were as much a part of the this wilderness expedition as the cliffs, waves, and wind.

Idyllic, at times. And shot through with exactly as much whining and bickering as a pair of average six- and four-year-olds would give you anywhere. Only this was the middle of the wilderness. There were mountains ahead of us, and yawning valleys of obstacles and uncertainty, creating the chasm between ‘vacation’ and ‘expedition.’

The kids didn’t know better. This was the second month-plus expedition they’d done in a year, the fifth in my six-year-old’s life.

When we crossed the ocean pass, we thought worst was behind us. Ten days beyond that treacherous span of ocean, we adults hunched in the lee of a small lump of tundra, nibbled our lunch ration of a single pilot cracker each, and laughed at our unfounded optimism.

The kids ran circles in the wind-flattened grass (they got to eat as much as they’d like), and I wondered at that waste of precious energy.

The ocean was too frothy to paddle, the grass near the shore was taller than the kids and thick enough to swim through. The only way left was over a high pass that may or may not be passable. Otherwise, we’d starve before we got to our next food drop.

We could call for rescue, but who calls the coast guard when the terrain is steep and lush and the cookies are all gone? The five of us would have to solve this together.

Wilderness Expedition Coaxing: Blueberries for All!

It took hours to coax Lituya up the first steep rise of the day, climbing from blueberry bush to blueberry bush, cheering her on with my own purple-toothed grin, until all her fatigue was forgotten. Both kids flew over the tundra in an excited rush, yelling at nothing.

We probably climbed six hours before we reached the pass. Clouds raced through that gap on their way from the Bering Sea to the Pacific Ocean, leaving beads of mist on my cheeks. Blowing fog enveloped us. I squinted at the lines on my map, trying to judge topography with my thumbnail. Would it be too steep?

Lituya trailed a few yards behind me, singing to herself: “It’s a foggy misty day with a whisper in the wind… Shhhhhh… Shhhhhh…. Whoosh-whoosh, whoosh-whoosh…” Her cheery verses were half rhymed and semi-rhythmic; about wind blowing the fog to a new foggy place, about leaves and ponds, and water drop jewels that sparkled on the moss.

We picked our steps through steep jumbled rocks. The world greened as we descended, a deep V gully bristling with kid-high grass. We held the kids’ hands on the most tilted traverses, butt-scooched down into each gully that sliced across the main one, then scrambled back out again.

“People talk about kids being well-behaved,” Hig mused. “And in some contexts, ours aren’t. But in this context, they’re better behaved than most adults.”

“You mean they’re well behaved when we ask them to traverse rocky mountain passes for nine hours?” I replied.

It wasn’t an exaggeration. We’d started our climb from the ocean at 11AM, fueling the stretches between berry bushes with a liberal application of granola bars. Now it was 8PM. The clouded sky was beginning to dim in the creeping, almost imperceptible style of an Alaskan evening.

Eventually, it was certain the steep gully would open up, and a patch of ground with a slope less than thirty degrees would appear. Eventually, there would be a place for a tent.

We slowly clambered over boulders at the edge of the creek. Lituya stuck her fingers into the ghostly gray swirls of glacial water. Katmai solved math puzzles in his head. Lituya waved a magic wand made from a tuft of cotton grass. Katmai made fairy dust from a fistful of ferns and petals. I paused, waiting for them to catch up, antsy about our goal.

I realized, in that moment, that their playful pace makes them the perfect expedition partners. Comfort in the wilderness trumps size, strength, speed, and even technical skills. My kids knew that it was okay not to know where we would sleep, or how long it would take, or what was beyond the next corner. That we would all have to figure it out together, one gully at a time.

We camped eventually. We made it to our food drop eventually. We finished the trip eventually. And on the way there were whales to paddle beside, sunny meadows of berries and flowers, and of course, more obstacles. Unrivaled wonder and unanticipated challenge. If their crazy childhood gives them anything, I hope it gives them this; the ability to embrace the unknown. 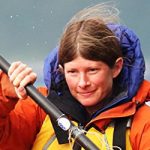 Erin McKittrick is an writer, adventurer, mother, and scientist, who spends much of her time taking her two kids out into the wilds of Alaska. Her newest book Mud Flats and Fish Camps:800 Miles Around Alaska’s Cook Inlet is an inspiring tale of an ordinary family choosing to walk a more adventurous path. She is also the author of Small Feet, Big Land: Adventure, Home and Family on the Edge of Alaska and A Long Trek Home: 4,000 Miles by Boot Raft and Ski and you can find her blog at Ground Truth Trekking.org