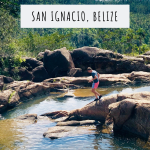 by Amy Whitley – The moment my seventeen-year-old son and I stepped out of the airport shuttle van and into the small porte-cochère of San Ignacio Resort Hotel in the Cayo District of Belize, I understood why this Belize resort is affectionately known as ‘the only jungle in town’.

Literally steps from the lively bustle of downtown, the moment you step through the open-air doorway, you’re met with the sound of birdsong, as the eye is swept toward an endless green carpet of the Belize rainforest awaiting family vacation adventure and discovery out the back doors.

The San Ignacio Resort Hotel and the small town of San Ignacio, Belize itself was our home base for a week’s worth of mom-and-teen outdoor adventure and culture, and were we ever in the right place. Far removed from the beaches and cayes Belize is primarily known for, San Ignacio is a two-hour drive from the international airport in Belize City, down a combination of paved and dirt roads of all size and quality.

This Belize resort is tucked away, past the savannas and wetlands of the east, deep in the heart of the Cayo District, just a handful of miles from the Guatemalan border. This is a land of jungle, pockmarked by caves, cenotes, and Mayan ruins; some of the latter just oddly-shaped hilltops, their limestone structures still buried under centuries of soil and rainforest.

We met the concierge team of San Ignacio Resort Hotel before we’d even seen our room, a fact that showcases the priority here. Yes, our suite, one of three at the hotel, was excellent.

Magnificent, actually, with ample living space and a wide balcony overlooking what my son and I dubbed the ‘tree of life,’ home to iguanas and toucans.

The resort also offers suites for larger families, like its River View Suite that can accommodate up to 6 guests, with two separate sleeping spaces. Adventurers staying here enjoy private outdoor living and dining space and stunning views of the Macal River and surrounding rainforest valley, as well as complimentary access to the Green Iguana Conservation Project and Medicinal Trail tour.

Pro Tip: Book your San Ignacio Resort stay through Booking.com. They guarantee the best prices and no booking fees!

But guests come to San Ignacio for the adventures that await in the outdoors first, relaxation and pampering, second.

We sat down for an orientation to the tours we’d scheduled during our stay: excursions to Mayan ruins archaeological sites at the Xunantunich and Cahal Pech; caving and swimming trips to St. Herman’s Cave, Blue Hole National Park, and Mountain Pine Ridge Forest Reserve; and city cultural and historical tours of San Ignacio.

In addition, we’d get a chance to tour the Green Iguana Conservation Project (conducting important rescue, breeding and re-introduction work) and five acres of medicinal trails, located right on the grounds of the San Ignacio Resort Hotel.

We were informed that whenever possible, every guest is paired with the same guide daily, and all tours are kept personalized. We departed for dinner on the back patio of the hotel knowing we were in good hands.

Our first morning, we woke to warblers and toucans dipping and flying around our tree, while the hushed voice of a guide conducting an early morning bird-watching tour rose softly from the restaurant deck below us.

After a breakfast on the patio of banana pancakes and Belizean beans and eggs, we set off for our own outdoor adventure. We repeated this process for the next four days, returning in time for a refreshing dip in the pool and a short siesta in a hammock before dinner.

Xunantunich and Cahal Pech: both these mayan ruins archaeological sites are rich in historical and cultural significance, and both are within easy distance of San Ignacio. Our leader, San Ignacio Resort Hotel guide Cruz, shuttled us only 25 minutes to arrive at Xunantunich, where we walked in the footsteps of Mayan people who civilized this region long before Columbus made his mark (or Christ, for that matter).

You can certainly visit this Mayan ruins site, and the smaller and even closer Cahal Pech, on your own, but we would have missed half of the history without Cruz to guide us. At both places, we were wowed by the interior living spaces and bedchambers we could poke into, and the steep steps we could climb for spectacular jungle views.

Also a very manageable drive from San Ignacio, St. Herman’s Cave is located within Blue Hole National Park. Yes, you can enter on your own, but you can only tour the cave network with an official guide. Again, we had Cruz at our side, so we could hike, climb, crawl, or leap our way through the huge cave to emerge on the other side.

Unlike any cave system I’ve explored in the United States, St. Herman’s cave lacks paved paths, guard rails or lights, so it feels challenging and exciting – and just a bit scary (a teenager’s dream).

Donning headlamps and helmets, we made it through (the route takes about 1.5 hours) and emerged, sweaty, on the other side. We could have explored further the network of trails in the park, but we opted for a picnic lunch and a dip in the Blue Hole (a cenote swimming hole about half a mile away, then two minutes by car).

If you prefer, you can see some of the cave via a guided river tubing adventure, but if you’re comfortable with small spaces, I recommend seeing the whole cave on-foot.

Yes, a pine forest exists in Belize, in Mountain Pine Ridge Forest Reserve. Located at about 3,000 feet of elevation, the reserve is about an hour and a half from San Ignacio along rugged (at times) dirt roads. It’s a long drive, but once inside the park, we found some of our favorite outdoor attractions in Belize.

While guided tours of this reserve are optimal (we brought Cruz!), it is possible to drive yourself as long as the vehicle can navigate rough roads. You’ll want a good map of the area, and be advised that Google and GPS won’t help once in the park.

Start at the Rio Frio Cave, located about 11 miles down the park’s main dirt road, where a cavernous opening leads to what the Mayans once described as the Underworld. It forms a tunnel here, with the Rio Frio pooling and winding through it. Nearby, the Rio On awaits, with a series of deep and shallow pools, cascades and waterfalls ready-made for adventurous families to explore.

Hands down, the pools at River On were our favorite attraction. We descended a long concrete set of stairs then leapt our way up the river, sampling pools as we went (though if you need a gentler entry, a sandy slope to the pools offers an easier path).

Closer to the entrance of the park, you can also follow signage to 1,000 Foot Falls, an impressive waterfall (of the size its name suggests) you’ve likely seen on postcards of Belize. It’s a decent detour on another rough dirt road (it took us about 30 minutes to get there from the main dirt road), and features an overlook where you can snap photos of the falls and watch for hawks and raptors circulating along the steep ridge lines.

While we were impressed by the view and wished some trail networks existed here, because after so much time in the van, we were itching to get some exercise and spend more time along the ridge.

We wanted to make sure we learned as much as we could about our hometown for the week, so we dedicated a full morning to San Ignacio itself. We toured the San Ignacio market, making our way through the fruit and vegetable stands (busiest on Tuesdays, Fridays and Saturdays) and also really enjoyed learning about the history and process of cacao and drinking chocolate in the Mayan tradition at AJAW Chocolate and Crafts. Additional tours offer cooking classes and lessons on corn processing and tortilla-making at a Mayan women’s co-op.

Our week in San Ignacio barely scratched the surface of the outdoor and cultural excursions offered here. With more time, we would have canoed the Macal River, rappelled into a sinkhole, toured more caves and Mayan ruins in Belize, and driven over the border to see the Mayan ruins at Tikal.

San Ignacio provided the perfect backdrop for a laid-back vacation vibe, finding that we didn’t miss mega-resorts, all-inclusive dining experiences, and beaches. The boutique San Ignacio Resort Hotel, with its inviting hammocks, pool, and outdoor/indoor restaurant and bar at the top of the hill in this small Belizean town was more than enough to keep a teen and his mother blissfully happy.

Know Before You Go:

The Belize Tourism website is a good resource for general questions. For more information on planning your San Ignacio family vacation, read on.

Amy Whitley is a travel writer and editor who has written about family and outdoor experiences for local and national publications since 2009. Follow Amy @amywhitleywrites on Instagram and @amywhitleytravels on Twitter.