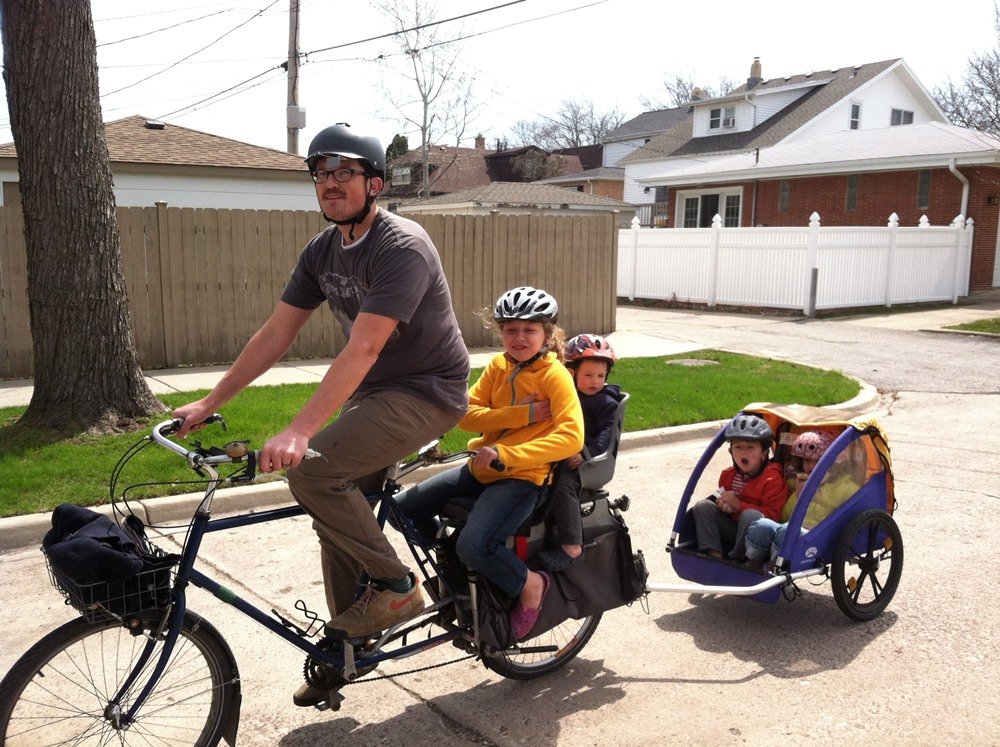 I’ve seen the glances from people in their warm, cool, or dry car (depending on the season) with what looks like pity, or perhaps shock. As the rain pelts and the wind nearly drives me to a halt, I think to myself, “Do they see me and wonder why I would choose to bike in such inclement weather?”

I can’t blame them.

As a year-round bike commuter in Chicago, it’s no exaggeration to say I’m exposed to every combination of weather on my 26-mile round trip, and often all in a single day. And it never fails that someone steals a glance out of the corner of his or her eye, probably thinking, “What is that guy doing?”

But something changes when I have my kids along. Those same questioning or pitiful glances turn to smiles because, it seems, there’s something undeniably happy about seeing kids on a bike. Whether it’s their cute helmets making them appear that much cuter, or their animated arguments with each other becoming some sort of comedy spectacle, I leave a wake of happiness around me when cycling with my children.

Bicycling with my kids brings me joy, and I am constantly encouraging everyone I know to try it. Like to join the party? Try these tips to make family bicycling a bigger part of daily life.

You may be thinking, “I’d love to bike with my kids, but I just don’t have the time.” If you perceive bicycling purely as a recreational activity, I won’t argue with schedule restraints. That said, I’m sure most of you have errands to run and places to go, which brings the view of bicycling as another form of transportation instead of merely as a mode of recreation. Add the benefit of a fun, healthy, economical, and environmentally-friendly way to transport you, and your family, and you’re on the way.

One of my favorite movies is the 1991 comedy “What About Bob?” in which Bill Murray is Bob Wiley, a charismatic yet neurotic patient to his psychiatrist, Dr. Leo Marvin, played by Richard Dreyfus. Having just released his critically acclaimed book “Baby Steps,” comedy ensues when this egotistical doctor is driven to near insanity himself after pesky Bob shows up on his family vacation for help taking his own “baby steps.”

I’m not suggesting taking said steps toward becoming a biking family might drive you to insanity; it really is just about starting small. No need to “go big” and sell your car so you have to travel exclusively by bike, for instance. Try riding for fun at first, then increase style and length of trips from there.

According to a 2009 United States National Department of Transportation survey, approximately 40 percent of vehicle trips are less than two miles in distance. That means once you get back in the groove of riding, your next “baby step” could be to replace a handful of those short car trips with a bike ride.

In our case, baby steps were trips to the park, a ball game, or the neighborhood hardware store. For fellow Chicagoan and mom of two Meghan Pillow, her family’s ‘baby steps’ included trips to parks, libraries, school and the grocery store.

“When I’m biking with my children, I love being able to explore nature together and practice making observations about what we see,” she says.

For another local parent Serena Cherry, who bikes with her three children ranging in age from five to 10, her “baby step” was simply to get on a local trail.

“It is outside, exercise, and fun,” Cherry says.

For our family, the more we rode bikes together, the more baby steps we took, the easier it became. And, most important, the more normal it felt to our kids and us.

But it’s not all roses, is it?

“Sometimes bicycling can be a challenge in bad weather with rain or gusty winds,” Pillow says. That’s an understatement.

I’ve also found Chicago’s winter to be a challenge, though not an insurmountable one. Last winter, for example, my two sons and I completed a 13-mile errand in the middle of January on bike, made possible with adequate clothing. Not only were we very comfortable, but one son even fell asleep, and we all a great time after being cooped up indoors for much of the winter.

What if your child doesn’t like to ride her bike, or wants to ride on yours? I’ve found that the promise of a rest stop, which may or may not include snacks, is a powerful motivator to get children out on bikes. Cherry agrees.

“Pack snacks and water, and go often so they learn to love it,” she says.

If that’s not enough, choosing a fun destination can sometimes overshadow any child’s reservations about going by bike. Perhaps that means stopping to picnic at a park visiting to your local ice cream shop. Remember, small, simple trips are great ways to motivate kids before you set lofty goals for family bicycling.

Be a Good Scout.

I don’t remember much from my brief stint with Cub Scouts except the motto: “Be prepared.” I’ve found that philosophy useful in my own experience because the more mentally prepared I am, the better the bike trip, whether I’m commuting, running errands or just having fun.

That means having back-up plans or extra supplies just in case, including spare clothes, diapers, wipes, pacifier, snacks, water, and the like. For commuting and other family bike trips, I also make sure to have my phone, spare tubes, a pump and tire levers. Preparing for things “just in case” helps me worry less about “what could go wrong” and focus on my children, and their happiness, discovery and positive experiences.

If you are interested in bicycling for transportation with your children, there are countless online resources, and in-person community groups and organizations to help you get started. (Check for local bike advocacy group a Kidical Mass chapter near you). Another good baby step? Look for another family out on bikes and just smile when you see them.

Bicycling with your children isn’t overly complex, and if it were I wouldn’t do it, nor would the countless other families out there who are turning more of their trips into bike trips.

Now, get your kiddos geared up with the best kids bike under $100 and get out there! 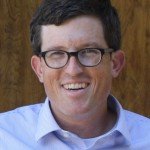 David Pulsipher and his family live in the Chicago area where he works for the Chicago Department of Transportation and is a year-round bike commuter. Connect with him on twitter/instagram: @davidpulsipher or via his blog, KidsBikesDads.