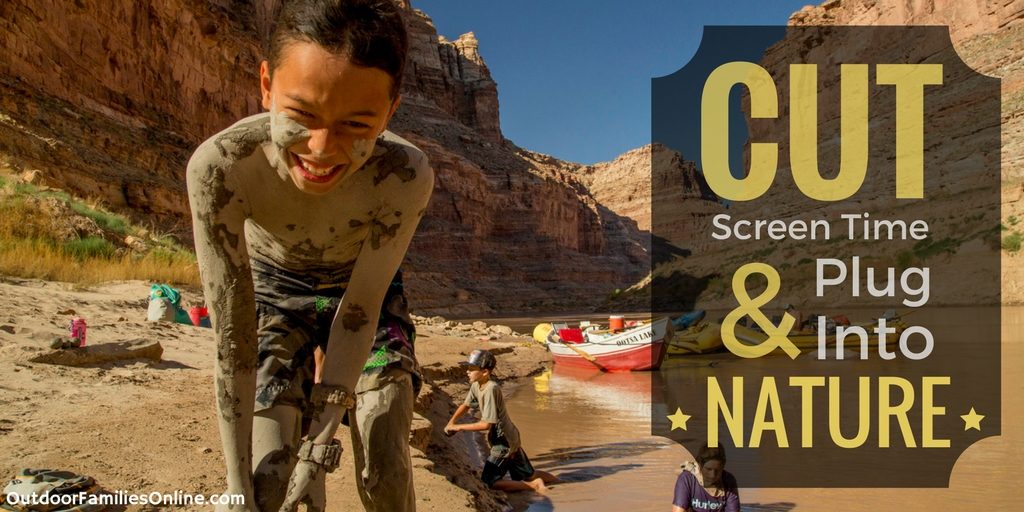 Editor’s Note: Outdoor Families Magazine is proud to announce our partnership with O.A.R.S. for the #100HoursUnplugged Challenge! Join us, O.A.R.S., and partners, Children & Nature Network, Family Travel Association, National Park Foundation, Chacos, and NRS , as we get unplugged, reduce screen time, and get outside more.

But even more shocking is that statistic next to this one: According to a 2015 study by Common Sense Media, American youth between the ages of 8 – 18 on average are logging 7.5 hours of screen time per day, and that’s not counting time spent using media for school or homework.

“What could our lives and our children’s lives be like if our days and nights were as immersed in nature as they are in technology?” American author and journalist, Richard Louv has spent more than a decade digging into the answers to this question. Best known for his book, “Last child in the Woods: Saving Our Children From Nature-Deficit Disorder,” Louv sounded the alarm for many parents and educators in his book, where he explored the ever-growing disconnect between kids and the outdoors, and how it impacts their physical and emotional health. Through extensive research and examples Louv attributed the epidemics of obesity, depression and attention disorders in our youth to a childhood that has largely moved indoors and online. He coined it “nature-deficit disorder.”

While Louv stressed his findings were not medical, but rather a societal diagnosis, more and more pediatricians have turned to “lack of nature” as a partial explanation for the growing list of issues they’re seeing in their practices. Some of them have even started writing prescriptions to go outside.

You don’t have to be a doctor to know the healing power of nature. But scientific research backs up the health benefits of spending time outdoors. For example, scientific research has shown that connecting with nature lowers blood pressure, reduces stress, and bolsters our immune system. It also helps fuel creativity and imagination and makes us happier overall.

If being outside makes us feel so good, then why are we obsessed with screen time? According to the Children and Nature Network, human beings have been urbanizing, and moving indoors since the introduction of agriculture, however social and technological changes in the past three decades have accelerated that social change. Among the top culprits: disappearing open space, restricted access to natural areas, parental fear magnified by news and entertainment media, and most of all — screens. In just the past decade, we’ve seen an unprecedented acceleration in the speed and quantity in which we get news, media and our access to it —and it’s having real and lasting impacts to our lives, especially the next generation.

Screens, games and videos have become the new “playtime” and in some instances, a “babysitter” of sorts. Gone are the days that kids come home from school and run off to play with their band of neighborhood friends outside. Instead, the majority of kids ask for screen time after the homework is done and dinner is eaten. It’s become a reward — and an addiction.

Adults are no better; in fact, we’re some of the worst offenders. Look around you. How many people have their eyes locked on a screen right now? At work, walking down the street, in restaurants and in the comforts of our own homes, chances are much of our days are spent looking at screens. With information and access to whatever media we could hope for at our fingertips at all times, it’s all too easy to find ourselves plugged into our device and disconnected from our lives and the outdoors. And it’s easy to forget: We’re leading the next generation by example.

Technology and information sharing has incredibly positive impacts to our lives, but it’s all too easy to have too much of a good thing in this case. The key, as with most things, is balance. And it all starts with unplugging and stepping outside.

“It’s clear that developing a balanced relationship with technology and spending more time outdoors is not only essential for children’s physical and emotional health, it’s the best way to ensure the long-term protection of our national parks and public lands,” Steve Markle, Vice President, Sales and Marketing for O.A.R.S. said. “Providing access to the outdoors and meaningful interactions with nature is at the heart of our work at O.A.R.S. Now, more than ever, we want to encourage kids and families to unplug and explore the great outdoors—whether that’s on a river trip or a backyard adventure.”

The inspiration behind the challenge is simple: To get as many people as possible to commit this summer to spending 100 hours unplugged, outdoors and together as a family, however people choose to define that.

One hundred hours is just about four days. It’s a long weekend family road trip, two separate weekends, or perhaps every Saturday in June. And whether families regularly unplug, slightly reduce screen time, or hardly ever unplug together, it’s totally doable. In setting out to launch this campaign, that’s what O.A.R.S. envisioned—a challenge that wasn’t completely out of reach for the average person. “Because with such alarming statistics on technology use, and the ever-growing data behind the benefits of time spent outdoors, it’s clear that every single person, especially kids, could use a nature break,” according to Markle.

“At its core, this is about future generations and leaving a legacy—and having some fun while we do it. It’s up to all of us to ensure that our kids and our grandkids grow up knowing wild places, wild rivers and that they develop a strong spirit of adventure—and it starts with cutting the screen time cord every once in a while and heading outside,” Markle said.

Learn more and take the challenge at www.100HoursUnplugged.com. 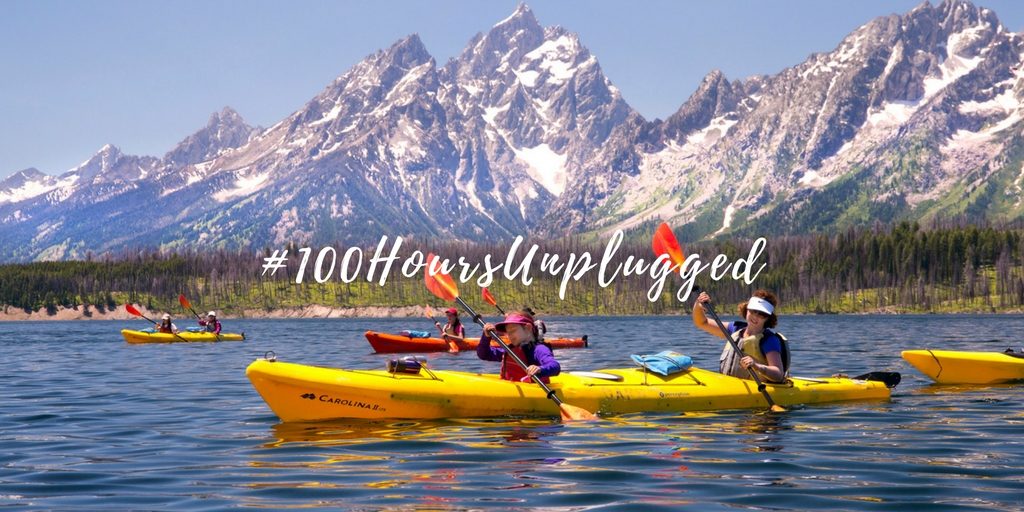 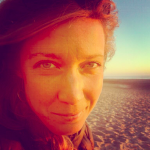 Emily Nuchols is the founder of Under Solen Media, a Portland-based communications firm with a cause. In addition to working with purpose-driven businesses and nonprofits, Emily writes for National Geographic Adventure, Matador Network and O.A.R.S.’ blog, The Eddy.